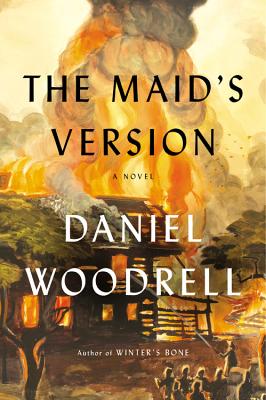 "Daniel Woodrell is the American writer we increasingly look to for the latest urgent news on the American soul. The Maid's Version is a beautiful engine of a novel, whose cogs were not entirely made by human agency, one might hazard to say. As regards the level of reading pleasure, the highest. As regards the level of literary achievement, the highest."--Sebastian Barry—-

"I'd gladly sign a petition to see Mr. Woodrell included on any roll call of America's finest living writers. He conveys a sense of the past with the stringent affection of Katherine Anne Porter; his turns at bedlam humor are worthy of Charles Portis; and his gorgeously tangled prose is all his own."--Sam Sacks, Wall Street Journal—-

"Woodrell is, like every truly great novelist, a mythmaker with both eyes on the absolute....The Maid's Version is one more resplendent trophy on the shelf of an American master."--William Giraldi, The Daily Beast—-

"Compact and soulful....The Maid's Version's worth is also in its luminous prose. Woodrell's sentences bristle with finely tuned language and almost biblical rhythms of his characters' speech....Further proof, as if we needed it, that Woodrell is a writer to cherish."--Adam Woog, Seattle Times—-

"The Maid's Version shows one of America's best writers at the top of his game."--Kevin Nguyen, Grantland—-

"For readers new to Daniel Woodrell's work, The Maid's Version is a perfect introduction and an invitation to read more. It's a short book...but there are lifetimes captured here....Throughout this remarkable book, Woodrell is an unsentimental narrator of an era that is rendered both kinder and infinitely less forgiving than our own."--Ellah Allfrey, NPR Books—-

"The author of nine widely-praised novels is sometimes described as a master of Ozark noir, but his gripping narratives and pitch-perfect language transcend genre."
—Reader's Digest, "23 Contemporary Writers You Should Have Read by Now"