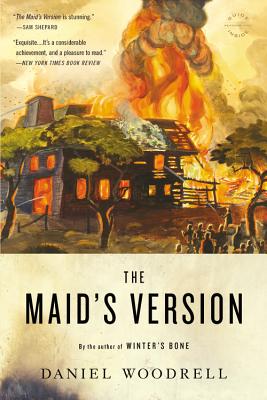 "The Maid's Version is one more resplendent trophy on the shelf of an American master."--William Giraldi, The Daily Beast—-

"Further proof, as if we needed it, that Woodrell is a writer to cherish."--Adam Woog, Seattle Times—-

"Throughout this remarkable book, Woodrell is an unsentimental narrator of an era that is rendered both kinder and infinitely less forgiving than our own."--Ellah Allfrey, NPR Books—-

"In fewer than 200 pages, but with a richness of theme and character worthy of the weightiest Victorian novel, Woodrell brings West Table to life in the varied experiences of its sons and daughters. "--Wendy Smith, Washington Post—-

"You might have seen Jennifer Lawrence's breakout role in Winter's Bone, but did you know the movie is based on a novel by the audaciously talented Woodrell? The author of nine widely-praised novels is sometimes described as a master of Ozark noir, but his gripping narratives and pitch-perfect language transcend genre."—Reader's Digest, "23 Contemporary Writers You Should Have Read by Now"

Five of Daniel Woodrell's published novels were selected as New York Times Notable Books of the Year. Tomato Red won the PEN West Award for the Novel in 1999. Woodrell lives in the Ozarks near the Arkansas line with his wife, Katie Estill.
Loading...
or support indie stores by buying on