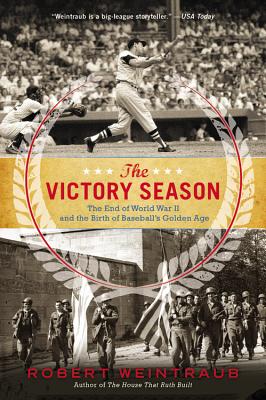 "Weintraub is a big-league storyteller .... He loads the bases with the kind of entertaining anecdotes, minutiae, and quotes that separate baseball-and baseball writing-from other sports." -- USA Today

In the spring of 1946, Americans were ready to heal. The war was finally over, and as America's fathers and brothers were coming home so too were baseball's greats. Ted Williams, Stan Musial, and Joe DiMaggio returned with bats blazing, making the season a true classic that ended in a thrilling seven-game World Series. America also witnessed the beginning of a new era in baseball- it was a year of attendance records, the first year Yankee Stadium held night games, the last year the Green Monster wasn't green, and Jackie Robinson's first year playing in the Brooklyn Dodgers' system.

THE VICTORY SEASON thrillingly recounts these years of baseball and war, including the little-known "world series" that servicemen played in a captured Hitler Youth stadium in the fall of 1945. Robert Weintraub's extensive research and vibrant storytelling enliven the legendary season that embodies what we now think of as the game's golden era.

Robert Weintraub is the author of The House That Ruth Built and is a frequent contributor to The New York Times sports pages. He is a sports columnist for Slate, and his writing has also aired on ESPN, ABC Sports, CBS Sports, and dozens of other outlets. He lives in Decatur, Georgia.

Praise For The Victory Season: The End of World War II and the Birth of Baseball's Golden Age…

"A meticulously researched and elegantly written chronicle of what happened in 1946... From start to finish, The Victory Season is a home run." -- Fort Worth Star-Telegram

"Weintraub loads the bases with the kind of entertaining anecdotes, minutia and quotes that separate baseball -- and baseball writing -- from other sports, and he skillfully captures the facts and texture of the '46 season with meticulous research and a conversational style. Weintraub is a big-league storyteller." -- USA Today

"Weintraub tells myriad good stories. If you want generous context for a great season of baseball when it was still the national pastime and the country was in fascinating flux, Weintraub is your man." -- Washington Post

"A beautifully written paean to the 1946 baseball season, when normalcy returned to the national pastime." -- Mike Vaccaro, New York Post

"The Victory Season leaps off the page like a newsreel." -- Allen Barra, Chicago Tribune

"We see a lot of baseball books each spring, but few will be more supremely entertaining than The Victory Season... Impossibly charming... A winning account." -- Newsday

"Even if you think you know the history of baseball, Weintraub will surprise you with many gems from his meticulous research. The Victory Season is an important work featuring an all-star cast." -- James Miller, co-author of Those Guys Have All the Fun: Inside the World of ESPN

"There was more to baseball in 1946 than Ted Williams and Stan Musial marching home from war. The tectonic plates were shifting beneath the game's surface as the color line developed its first cracks and greedy team owners unwittingly inspired baseball's labor movement. With a Halberstam-like sense of purpose, Robert Weintraub captures it all in The Victory Season." -- John Schulian, co-editor of At the Fights, author of Sometimes They Even Shook Your Hand

"Bright writing and the sweat of painstaking research bring baseball's Greatest Generation to life in this tale of a poignant and pivotal season in the game's history. Robert Weintraub's magic trick is to make you feel as if you're watching Leo Durocher, Ted Williams and company in real time." -- John Eisenberg, author of Ten-Gallon War: The NFL's Cowboys, the AFL's Texans, and the Feud for Dallas's Pro Football Future

"In the tradition of Robert W. Creamer's classic 'Baseball in '41,' Robert Weintraub's 'The Victory Season' doesn't merely revisit a pivotal baseball season, it places that season in a larger historical and cultural context. It is a season - and a book - to be relished, as America returns to a very familiar place: at home, at peace, and ready to follow DiMaggio, Musial, Williams, and their compatriots across another glorious summer." -- Michael MacCambridge, author of America's Game: The Epic Story of How Pro Football Captured A Nation

"Rob Weintraub has written a fascinating tale of a pivotal year for baseball and America. The research and storytelling are first-rate." -- Jonathan Eig, New York Times bestselling author of Luckiest Man: The Life and Death of Lou Gehrig and Opening Day: The Story of Jackie Robinson's First Season