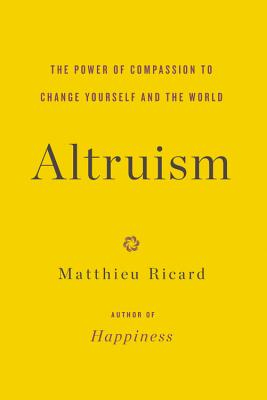 The Power of Compassion to Change Yourself and the World

The author of the international bestseller Happiness makes a passionate case for altruism -- and why we need it now more than ever.

In Happiness, Matthieu Ricard demonstrated that true happiness is not tied to fleeting moments or sensations, but is an enduring state of soul rooted in mindfulness and compassion for others. Now he turns his lens from the personal to the global, with a rousing argument that altruism -- genuine concern for the well-being of others -- could be the saving grace of the 21st century. It is, he believes, the vital thread that can answer the main challenges of our time: the economy in the short term, life satisfaction in the mid-term, and environment in the long term.

Ricard's message has been taken up by major economists and thinkers, including Dennis Snower, Amartya Sen, Joseph Stiglitz, and George Soros. Matthieu Ricard makes a robust and passionate case for cultivating altruistic love and compassion as the best means for simultaneously benefitting ourselves and our society. It's a fresh outlook on an ardent struggle -- and one that just might make the world a better place.

Matthieu Ricard is a Buddhist monk, an author, translator, and photographer. He has lived, studied, and worked in the Himalayan region for over forty years. The son of French philosopher Jean-François Revel and artist Yahne Le Toumelin, Matthieu was born in France in 1946 and grew up among the personalities and ideas of Paris' intellectual and artistic circles. He earned a Ph.D. degree in cell genetics at the renowned Institut Pasteur under the Nobel Laureate Francois Jacob.

In 1967, he traveled to India to meet great spiritual masters from Tibet. After completing his doctoral thesis in 1972, he decided to concentrate on Buddhist studies and practice. Since then, he has lived in India, Bhutan, and Nepal and studied with some of the greatest teachers of that tradition. He is the author of several books including The Monk and the Philosopher, a dialogue with his father; The Quantum and the Lotus, a dialogue with the astrophysicist Trinh Xuan Thuan; Happiness: A Guide to Developing Life's Most Important Skill; and Why Meditate? His books have been translated into over twenty languages.

Praise For Altruism: The Power of Compassion to Change Yourself and the World…

"Altruism is divided into short, cogent chapters, making it surprisingly accessible, despite its massive dimensions. Much of the book is derivative but nonetheless immensely useful, an encyclopedic synthesis of evidence and examples from current events, books, scientific papers and personal experiences.... The numerous individual stories [Ricard] recounts are inspiring and often downright gripping, such as the California man who fought off a lion to rescue a small child.... Altruism is a careful, detailed, hard-nosed assessment of what is needed both for individual happiness and for the welfare of the planet.... This book is so rich, so diverse and, yes, so long that it is best kept as an inspiring resource to be consulted over many years."—David Barash, Wall Street Journal

"Matthieu Ricard brings together ancient wisdom and scientific insights to put forth a truly compelling global vision for the 21st century, cutting through our endless distractions and asking, 'What is a good life?' At a time when we as individuals and as a society have largely abandoned that question, his voice, his message and his wisdom are greatly needed."—Arianna Huffington, founder of Huffington Post and author of Thrive

"Matthieu Ricard is an extraordinary human being, whose luminous presence and gentle voice have a surprising effect: they compel respect for his benign view of life and make routine cynicism impossible."—Daniel Kahneman, winner of the Nobel Prize in Economics and author of Thinking Fast and Slow

"Altruism is just what is needed to bring hope to those depressed by the violence, war, selfishness and corruption that surround us today. Matthieu Ricard provides convincing evidence based on both careful research and personal experience that altruism is an integral part of our nature with the desire to help others not only present in small children, but also in many animals. Altruism addresses how these qualities can be cultivated and enhanced in the individual and how a more altruistic society is not only possible but essential if we care about the future. Matthieu, thank you for writing this book."—Jane Goodall, UN Messenger of Peace, founder of Roots and Shoots, and noted author

"Matthieu Ricard is a genius for our times, a rare combination of scientific brilliance with the heart of a saint."—Daniel Goleman, author of Emotional Intelligence

"Written with deep conviction and breathtaking scope, this is a must-book for anyone who wants to explore the human capacity for altruistic love and compassion, and the potential of this capacity to transform our lives. In conversation with Western philosophical and scientific perspectives, the book offers a Buddhist vision for extending altruism beyond its natural limits through carefully crafted meditation practices. The goal is, quite simply, to enable you and me, our society, and all sentient beings to experience less suffering and greater happiness. Could one desire more?"—Daniel C. Batson, author of Altruism in Humans

"Who better to tell us about altruism than a Buddhist monk and scientist, who has meditated so extensively on compassion that it has changed the left side of his brain? In a lively and personal account, Matthieu Ricard takes us through the origins of empathy and altruism, explaining how biology laid the foundation, whereas culture and spirituality permit us to expand its reach."—Frans de Waal, author of The Age of Empathy

"This remarkable book is an extremely well-documented and elegantly argued plea for altruism, kindness, and compassion in order to address the primarily human-inflicted suffering and sorrow in this world. What is usually unknown or ignored is that altruism is a cultivatable skill, a way of being that can and needs to be chosen to optimize our well-being as both individuals and as a species. If you doubt that, just read this book. Even little snippets will blow your mind and inspire you, as Matthieu puts it, to change yourself and the world."—Jon Kabat-Zinn, author of Full Catastrophe Living and Coming to Our Senses

"Ricard's book, full of good behavior on the part of humans-and other animals-is of a piece with Steven Pinker's The Better Angels of Our Nature in suggesting that we don't have to be rotten. Inspirational in all the right ways..."—Kirkus

"Matthieu Ricard brings a breadth and depth of reflection and research that offers hope for our global family. He never shies away from hard truth. This wonderful gift, as sweeping in its scope as it is precise in its analysis, illuminates our common humanity."—John J. DeGioia, President of Georgetown University

"What a magnificent masterpiece. I am inspired all over again! This is an important contribution to our conception of human nature."—Dennis Snower, President of the Kiel Institute for the World Economy

"Well known for the generosity of its welfare state, Europe is feeling a fair share of 'compassion fatigue' these days as a result of three crises on its doorstep.... Europe's current hand-wringing is, at heart, a lesson about its giving spirit.... In a new book entitled Altruism, French thinker Matthieu Ricard makes a case for acknowledging what he calls the 'banality of good,' or recognizing that behavior such as generosity is commonplace and punctuates the daily lives of people. The book is a timely message as Europe struggles with these big decisions."—Christian Science Monitor

"[A] tour de force [that] brings together science, religion and history to explore the nature of compassion."—Carolyn Gregoire, Huffington Post

"The idea that money and possessions do not make us happy has become the new common sense. Instead, people now seek experiences as well as a kind of spirituality-lite, such as the secular practice of mindfulness. No wonder the scientist and Buddhist monk Matthieu Ricard's book Altruism has become a huge bestseller. The promise of its subtitle is that, by developing compassion, you can 'change yourself and the world.'"—Julian Baggini, New Statesman

"A careful collection of research, literature, and theory on altruism.... Altruism is the final domino that launches Ricard into view as one of the most notable, visible altruists of recent years."—Ashley Karlin, Los Angeles Review of Books
or
Not Currently Available for Direct Purchase
Copyright © 2020 American Booksellers Association