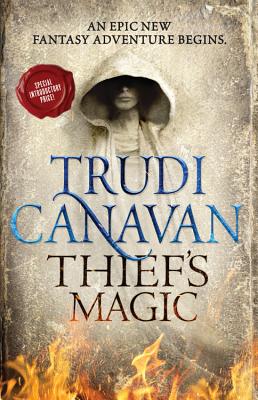 Forget what you know about the nature of magic.

In a world where an industrial revolution is powered by magic, Tyen, a student of archaeology, unearths a sentient book called Vella. Once a young sorcerer-bookbinder, Vella was transformed into a useful tool by one of the greatest sorcerers of history. Since then she has been collecting information, including a vital clue to the disaster Tyen's world faces.

Elsewhere, in an land ruled by the priests, Rielle the dyer's daughter has been taught that to use magic is to steal from the Angels. Yet she knows she has a talent for it, and that there is a corrupter in the city willing to teach her how to use it -- should she dare to risk the Angels' wrath.

But not everything is as Tyen and Rielle have been raised to believe. Not the nature of magic, nor the laws of their lands. . . and not even the people they trust.

"The darling of the fantasy fiction scene returns with a magical new trilogy to delight loyal readers and newcomers alike....Canavan cleverly keeps you guessing...definitely an inviting introduction to the series."
—SciFi Now on Thief's Magic

"Will hook readers immediately and they won't be able to put this thrill-ride of a book down."
—RT Book Reviews on Thief's Magic

"This captivating tale has already been hailed by critics as a 'must for lovers of good fantasy."
—Marie Claire (Australia) onThe Magicians' Guild

Trudi Canavan published her first story in 1999 and it received an Aurealis Award for Best Fantasy Short Story. Her debut series, The Black Magician Trilogy, made her an international success and five of her novels have been Sunday Times bestsellers in the UK. Trudi Canavan lives with her partner in Melbourne, Australia, and spends her time writing, painting and weaving.
Loading...
or
Not Currently Available for Direct Purchase