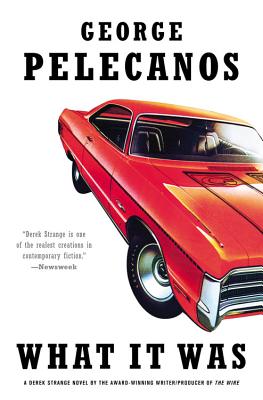 What It Was (Derek Strange and Terry Quinn Series)

Washington, D.C., 1972. Derek Strange has left the police department and set up shop as a private investigator. His former partner, Frank "Hound Dog" Vaughn, is still on the force. When a young woman comes to Strange asking for his help recovering a cheap ring she claims has sentimental value, the case leads him onto Vaughn's turf, where a local drug addict's been murdered, shot point-blank in his apartment. Soon both men are on the trail of a ruthless killer: Red Fury, so called for his looks and the car his girlfriend drives, but a name that fits his personality all too well. Red Fury doesn't have a retirement plan, as Vaughn points out - he doesn't care who he has to cross, or kill, to get what he wants. As the violence escalates and the stakes get higher, Strange and Vaughn know the only way to catch their man is to do it their own way.

Rich with details of place and time - the cars, the music, the clothes - and fueled by non-stop action, this is Pelecanos writing in the hard-boiled noir style that won him his earliest fans and placed him firmly in the ranks of the top crime writers in America.