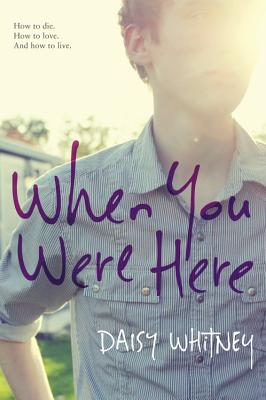 When You Were Here

Filled with humor, raw emotion, a strong voice, and a brilliant dog named Sandy Koufax, When You Were Here explores the two most powerful forces known to man-death and love. Daisy Whitney brings her characters to life with a deft touch and resonating authenticity.

Danny's mother lost her five-year battle with cancer three weeks before his graduation-the one day that she was hanging on to see.

Now Danny is left alone, with only his memories, his dog, and his heart-breaking ex-girlfriend for company. He doesn't know how to figure out what to do with her estate, what to say for his Valedictorian speech, let alone how to live or be happy anymore.

When he gets a letter from his mom's property manager in Tokyo, where she had been going for treatment, it shows a side of a side of his mother he never knew. So, with no other sense of direction, Danny travels to Tokyo to connect with his mother's memory and make sense of her final months, which seemed filled with more joy than Danny ever knew. There, among the cherry blossoms, temples, and crowds, and with the help of an almost-but-definitely-not Harajuku girl, he begins to see how it may not have been ancient magic or mystical treatment that kept his mother going. Perhaps, the secret of how to live lies in how she died.

Praise For When You Were Here…

Praise for When You Were Here:"A poignant coming-of-age story intertwining loss and hope against a background of Japanese culture...Themes of prescription drug abuse, death and teen pregnancy make this a heavy go, but they don't drag the text down, as they are expertly balanced by Kana's spunk, Danny's pained but authentic voice, and the overarching theme of love."—Kirkus Reviews

"[An] evocative novel about living life to the fullest...Set against the colorful backdrop of Tokyo's bustling streets, this intricate story vibrantly depicts the stages of Danny's enlightenment and celebrates his mother's sanguine attitude toward life, love, and death."—Publishers Weekly

"Danny's journey to healing is heartbreaking, hopeful, and full of luminescent beauty... This gem of a book will lead readers to ponder life, love, death, and everything in between."—School Library Journal

"Despite the sad topic, it's refreshing to read a story centered on a boy's love for his mother."—Booklist