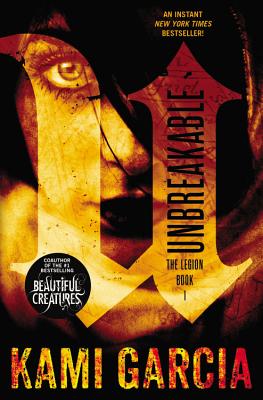 2013 BRAM STOKER AWARD NOMINEE FOR SUPERIOR ACHIEVEMENT IN A YOUNG ADULT NOVEL.
I never believed in ghosts.
Until one tried to kill me.
When Kennedy Waters finds her mother dead, she doesn't realize that paranormal forces are responsible--not until mysterious identical twins Jared and Lukas Lockhart break into her room and destroy a deadly spirit sent to kill her.
Kennedy learns that her mother's death was no accident, and now she has to take her place in the Legion of the Black Dove--a secret society formed to protect the world from a vengeful demon. A society left in the hands of a misfit group of teens with unique skills: Jared, combat trained, with a temper to match; Lukas, rogue hacker and code breaker; Alara, whose attitude is as powerful as her voodoo protections; and Priest, an engineer capable of making a weapon out of a soda can.
As the teens use their individual talents to battle paranormal entities, they earn their rightful places in the Legion--except for Kennedy, who is left wondering if she is truly one of them.
Can she stay alive long enough to find out--without losing her heart in the process?
Protect Yourself.
What you can't see CAN hurt you.

Praise For Unbreakable (The Legion #1)…

*"Edge-of-your-seat paranormal activity keeps this book moving at an astronomical rate....Garcia brings a fresh new take on the supernatural and the world of secret societies."—VOYA, starred review

"In a fast-paced series opener, Kennedy Waters encounters a ghost, loses her mother and meets a love interest--all in the first few pages....Garcia shakes it up with an ending that will leave readers reaching for the next book. This vivid, thoroughly imagines paranormal world will draw readers into its icy realm."—Kirkus Reviews

"Tense and deliciously twisty, Unbreakable is a breath-stealing midnight run through some of the creepiest locales I've seen rendered in fiction. . . . It's about forgiveness and redemption, love and loss, and it's anything but predictable. I loved it."—Ransom Riggs, #1 New York Times bestselling author of Miss Peregrine's Home for Peculiar Children

"Unbreakable is a fast-paced, relentless race through a world of demons and spirits, darkness and light -- and the finish line comes when you least expect it. I can't wait for the next book!"—Ally Condie, #1 New York Timesbestselling author of the Matched trilogy

"Unbreakable is a haunting, chilling tale that reminded me of Stephen King and Dean Koontz. Creepy places, believable characters with some of the best teen dialogue I've seen, and plenty of suspense. I loved it."—James Dashner, New York Times bestselling author of The Maze RunnerSeries

"Unbreakable is a fantastic adventure -- strong, engaging characters and a romance to die for. The twists will leave you breathless."—Rachel Caine, New York Times bestselling author of the Morganville Vampires series

"Unbreakable keeps you engaged and on edge. I found myself intrigued in Kennedy Waters' world and not wanting to put this book down. Looking forward to Book 2!"—Jason Hawes, co-creator and star of "Ghost Hunters" and a New York Times bestselling author

"An eerily fun and emotionally accurate venture into the complex layers of paranormal encounters from both sides. Looking forward to Book 2!"—Grant Wilson, co-creator of "Ghost Hunters" and a New York Times bestselling author

"'Supernatural' meets 'Buffy the Vampire Slayer.' Kami Garcia is Joss Whedon's talent-sister! I didn't just read Unbreakable; I lived it. When it comes to supernatural suspense, Garcia is the Slayer."—Nancy Holder, New York Timesbestselling author of Buffy: the Making of a Slayer & the Wicked saga

Kami Garcia is the #1 New York Times bestselling coauthor of Beautiful Creatures, which is now a major motion picture. Unbreakable is her first solo novel and the first book in the Legion series. Kami lives in Maryland with her family and her dogs, Spike and Oz, named after characters from Buffy the Vampire Slayer. You can find her online at www.kamigarcia.com and on Twitter @kamigarcia.