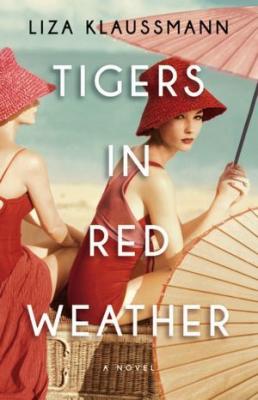 “Pull up a chair, pour a cup of tea - or something stronger - and get ready to travel from post-WWII America to 1980s Martha's Vineyard. You are about to meet five beautifully drawn characters who will fascinate you and break your heart. Klaussmann brilliantly weaves their lives together and, as the story unfolds, we find that each of them is covering up something. The dynamite ending comes as a complete surprise and yet it is so right. Don't miss this gem.”
— Elaine Petrocelli, Book Passage, Corte Madera, CA
View the List

Nick and her cousin, Helena, have grown up sharing sultry summer heat, sunbleached boat docks, and midnight gin parties on Martha's Vineyard in a glorious old family estate known as Tiger House. In the days following the end of the Second World War, the world seems to offer itself up, and the two women are on the cusp of their 'real lives': Helena is off to Hollywood and a new marriage, while Nick is heading for a reunion with her own young husband, Hughes, about to return from the war.

Soon the gilt begins to crack. Helena's husband is not the man he seemed to be, and Hughes has returned from the war distant, his inner light curtained over. On the brink of the 1960s, back at Tiger House, Nick and Helena -- with their children, Daisy and Ed -- try to recapture that sense of possibility. But when Daisy and Ed discover the victim of a brutal murder, the intrusion of violence causes everything to unravel. The members of the family spin out of their prescribed orbits, secrets come to light, and nothing about their lives will ever be the same.

Brilliantly told from five points of view, with a magical elegance and suspenseful dark longing, Tigers in Red Weather is an unforgettable debut novel from a writer of extraordinary insight and accomplishment.

Liza Klaussmann is the author of Tigers in Red Weather, an international bestseller for which she won a British National Book Award, the Elle Grand Prix for Fiction and was named Amazon UK's Rising Star of the Year in 2012. A former journalist, Klaussmann was born Brooklyn, New York and spent ten years living in Paris. She currently lives in North London. Villa America is her second novel.

Praise For Tigers in Red Weather: A Novel…

"With echoes of Nancy Drew murder mysteries and The Great Gatsby that extend well beyond the names Nick and Daisy-plus allusions to Wallace Stevens, to which it owes its abstruse title-TIGERS IN RED WEATHER is a deftly constructed, suspenseful family melodrama that exposes the dark innards of privilege."—USA Today

"Shot through with glamour and the glint of family secrets, TIGERS IN RED WEATHER has you immediately in its clutches. Intensely evocative, it is by turns unbearably febrile and utterly chilling, and often both at once."
—Megan Abbott, author of The End of Everything and Dare Me

"Exceedingly clever.... An elegant playbook on passive aggression, a study of the desires and resentments that burn away souls behind teeth-clenched smiles... Klaussmann is a master at unexpressed despair."
—Ron Charles, The Washington Post

"A complex, ambitious, and dramatic novel about the rich at the beach."
—Susan Cheever, Daily Beast

"With sultry prose and a sure hand for suspense, Liza Klaussmann expertly weaves a vivid tale of glamour and despair, fidelity and betrayal, secrets and abandon. TTIGERS IN RED WEATHER will have you furiously postponing all human interaction until its gripping finale."—Maria Semple, author of Where'd You Go, Bernadette

"Tennessee Williams knew it; so did Harper Lee. There's something about a story anchored in the summer months that makes deception a little juicier, desire a little sultrier, and murder just a little more wicked. Brimming with all three, Liza Klaussmann's skillfully constructed debut novel of family intrigue and restless secrets...arrives this summer as a riveting addition to the genre.... Klaussmann's full-bodied prose considers the shortcomings of intimacy and the pitfalls of searching for an overarching family truth-all with the seductive pull of a Gothic melodrama."
—Antonina Jedrzejczak, Vogue

"Klaussmann's carefully crafted soap opera skillfully commingles mystery with melodrama, keeping readers guessing about what really happened until the end. While her characters' duplicitous behavior will elicit strong reactions, Ed's psychological progression is the most fascinating to watch. The shocking finale, seen through Ed's all-knowing eyes, scintillates as much as it satisfies."
—Publishers Weekly Starred Review

"Gothic meets Martha's Vineyard in a thriller that captures a repressed generation and claustrophobic family relations.... Klaussmann has an eye for the small gesture that detonates an emotional bomb.... Throughout, [she] questions how to navigate a postwar world, and where women, specifically Nick and her aspirations, fit into it. She writes beautifully about this struggle.... A sharply drawn portrait of life among that ever-popular literary demographic: the beautiful and damned."
—Alice Fishburn, The Financial Times

"A riveting, deeply moving tale of the unraveling of one family's mysteries."
—Rory O'Connor, Examiner.com

"An astounding debut and undoubtedly one of the best books of the year."
—Melanie Smith, Bookreporter.com

"A suspenseful story that is by turns a mystery, an examination of a marriage and an exploration of the possibly fatal consequences of self-deception."
—Ilana Teitelbaum, Shelf Awareness

"A richly crafted story in which the setting is as much a character as those who inhabit it.... Klaussmann has created an exquisite and evocative story of family secrets that leaves the reader exhausted, exhilarated and, in tiger fashion, roaring for more."
—Cynthia Wolfe Boynton, Bookpage

"A meditation on love, desire, and personal choices, this rich and compelling literary debut novel by a former New York Times journalist and the great-great-great-granddaughter of Herman Melville is sure to appeal to a variety of readers."—Bette-Lee Fox, Library Journal Starred Review

"With palpable tension and spot-on sensual detail, Liza Klaussmann shows us a family in the exacting wake of the Second World War. Marvelously plotted and deliciously sophisticated, this is a book I'll be raving about for a good long while!"
—Paula McLain, author of The Paris Wife

"Ms. Klaussmann's strongest suit is the cut-glass quality of her prose, which presents the characters' perceptions in bold contours while still suggesting their emotional fragility."
—Sam Sacks, The Wall Street Journal

"This novel is a page-turner in that you can't wait to see what happens next, yet you have to put it down from time to time to think about and savor what you've just read. It's written from the point of view of five characters, and at its center is a very unsettling mystery-it stays with you long after you've read it."
—Gabriel Byrne, O: The Oprah Magazine

Does Tiger in Red Weather have a main character? If so, who do you think it is?

What does the murder represent in the novel? Does it have equal impact on all of the characters?

Is Nick a heroine or villain? Do you believe her assertion that she didn’t have an affair with Tyler? Does she really love Daisy, or does she resent her?

What brings about Hughes’s newfound feelings for Nick later in the novel? Is there a specific catalyst?

Hughes finds Ed’s behavior disturbing throughout the novel, but it’s not just the boy’s actions he’s threatened by. How does Ed’s way of thinking, and the knowledge he’s accumulated, threaten Hughes’s relationships and his world?

Why is the first-person used only in Ed’s section?

Tiger in Red Weather is divided into five sections, each focused on a different character. Which sections did you enjoy most and least, and why? What do you think we’re meant to feel about each of the characters? How does the author show us that some-thing is off about Ed long before his first-person narration grants us a window into his psyche?

Why does Helena stay with Avery, despite her unhappiness?

Why is so much of Daisy’s character told from a child’s point of view? What does that say about her role in the novel?

On page 134, after witnessing Tyler and Peaches kiss, Daisy wishes she could be like Scarlett O’Hara, independent and free, and forget about Tyler, but she’s also scared. When you were a child, who were your role models, literary or otherwise? What did they represent for you? Now that you’re older, whom do you look up to?

If you ranked the characters from most to least moral, where do they stand?

What does the title of the book mean? How is the poem related to the story?

On page 298, Ed tries to explain to Hughes his hunch that people are “going about it all the wrong way.” What do you think Ed means? Which people, and what would Ed approve of as the “right” way? Why does Ed’s comment so unsettle Hughes?

On page 351, Nick says to Hughes, “It’s the strangest thing, but I have this feeling . . . Like everything . . .” And Hughes replies, “Yes. Everything is.” Complete Nick’s sentence for her. What do you imagine she’s trying to say? Given the circumstances, is there any other way to interpret it? Why do you think the author chose to leave this vague, and how did it affect your experience as a reader?

What did you make of the ending of Tiger in Red Weather? Do you think Ed is rehabilitated?

Read “The Pathological & the Privileged” by Reading Group Choices' Neely Kennedy for discussible topics and themes!