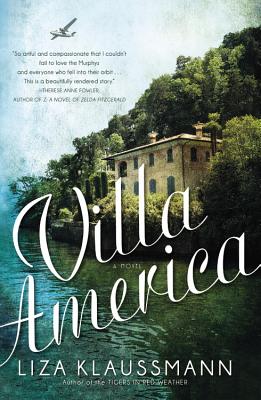 "Liza Klaussmann's VILLA AMERICA is so artful and compassionate that I couldn't fail to love the Murphys and everyone who fell into their orbit during those Lost Generation years, all of them fascinating and flawed and human. This is a beautifully rendered story."—Therese Anne Fowler, author of Z: A Novel of Zelda Fitzgerald

"What a gorgeous and profoundly moving book. I've been obsessed with the Murphys since I was a young teen...and Liza Klaussmann's novel felt both like it was utterly 'true' to their legend and yet also new and vital. I can't wait for the whole world to get to read it."—Megan Abbott, author of The Fever

"Klaussmann is a magnificent storyteller. Luminous, rich and superbly plotted, VILLA AMERICA swept me up into the deeply human, beautifully drawn lives of the Murphys and their dazzling circles of friends and family. This novel moves at a gallop but I kept stopping to marvel at the subtlety, the grace and the firework prose. I absolutely loved it."—Priya Parmar, author of Vanessa and Her Sister

"Another sensitive fictional portrait of a complicated marriage from the author of Tigers in Red Weather.... Klaussmann makes good use of several fine biographies of the Murphys (cited in an author's note) to capture the magic of a privileged, bohemian existence.... Beautifully written and surprisingly fresh."—Kirkus Reviews (starred review)

"Real-life figures of the jazz age throw parties on the French Riviera in this exhilarating blend of fact and fiction."—Lucy Scholes, Guardian

"Psychologically lush and gorgeously descriptive.... As disruptive love, betrayal, and cruel fate slowly gain cyclonic force, Klaussmann brings to scintillating and searing life scenes as wildly diverse as a dust storm, trench warfare, the bliss of being airborne above the radiant French countryside, the brittle gaiety of Sara's galas, and forbidden sexual bliss. In literary accord with Paula McLain, Nancy Horan, and Susan Vreeland, Klaussmann presents an enrapturing historical novel about a loving marriage complicated by suppressed desire in a time of now-legendary creative ferment."—Donna Seaman, Booklist (starred review)

"Propelled by the drama-filled foibles of nearly every prominent lost generation figure a history buff could wish for, Klaussmann's atmospheric prose contains a treasure trove of trivia for fans of the era.... Readers who are looking for a trip back in time will find this an ideal beach read."—Publishers Weekly

"Intriguing and tender to the bone."—Kim Hubbard, People "Book of the Week"

"An enthralling read from the first page-an absolute must for anyone who loves Hemingway and Fitzgerald and all the rest of the Lost Generation."—Beatriz Williams, Serendipity

"John Dos Passos, Cole Porter, Ernest Hemingway, and their spouses come alive in this richly detailed tale of friendships, creative rivalry, romance, drunkenness, and tragedy.... This is an engrossing read, sure to be popular with lovers of historical fiction who enjoyed Paula McLain's The Paris Wife."—Elizabeth Safford, Library Journal (starred review)

"A vivid and affecting portrait of the couple and their raucous times, as well as one of the saddest, most romantic historical novels you'll read this year. 'A'"—Amy Wilkinson, Entertainment Weekly

"The novel has many truly lovely moments.... Worth a read for fans of the era."—Shawna Seed, Dallas Morning News

"Very much a novel about marriage.... A tribute to [the Murphys'] effort to create a paradise as well as a sorrowful recognition of the impossibility of doing so."—Margaret Quamme, Columbus Dispatch