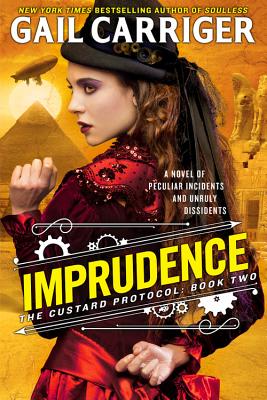 From New York Times bestselling author Gail Carriger comes the delightful sequel to Prudence.
Rue and the crew of the Spotted Custard return from India with revelations that shake the foundations of England's scientific community. Queen Victoria is not amused, the vampires are tetchy, and something is wrong with the local werewolf pack. To top it all off, Rue's best friend Primrose keeps getting engaged to the most unacceptable military types.

Rue has family problems as well. Her vampire father is angry, her werewolf father is crazy, and her obstreperous mother is both. Worst of all, Rue's beginning to suspect what they really are... is frightened.
The second book in the Custard Protocol series, in which Prudence travels to Egypt for Queen, ghosts...and the perfect pot of tea!
The Custard Protocol
Prudence
Imprudence
For more from Gail Carriger, check out:

Praise For Imprudence (The Custard Protocol #2)…