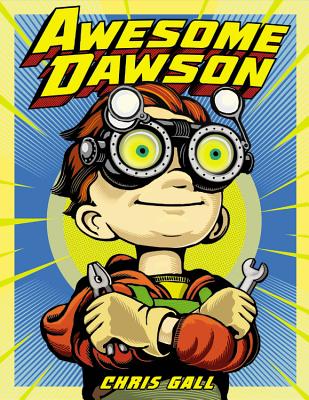 EVERYTHING CAN BE USED AGAIN! That's Dawson's motto. He collects junk that people throw away and turns it into something STUPENDOUS. But when Dawson uses his skills to create a machine to do his chores for him, he discovers he might have invented something a little too... AWESOME. Can he stop the rampaging robot before it destroys the entire town?
Chris Gall inspires kids to reuse, repurpose, and recycle in this inventive adventure about a boy superhero who turns trash into treasures--and saves the world while he's at it!

"This is action, adventure and imagination with a positive message."—Kirkus Reviews

"Gall make[s] full use of his skill for drafting the sort of straight-from-kids'-dreams machines he showcased in Dinotrux and Revenge of the Dinotrux."—Publishers Weekly

"Gall's busy, saturated spreads...[result] in vibrant imagery that is both slick and homespun, like Dawson's own creations....Superheroes, recyclers, and inventors unite!"—Booklist