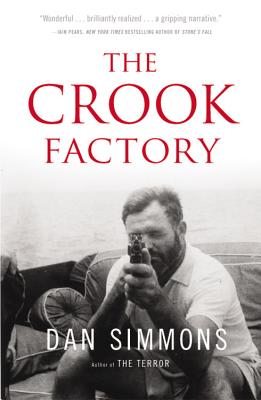 It's the summer of 1942, and FBI agent Joe Lucas has come to Cuba at the behest of the Director to keep an eye on Ernest Hemingway in the Caribbean. Lucas thinks of it as a demotion-a babysitting job for a famous writer who has decided to play spy, assembling a team of misfits including an American millionaire, a twelve-year-old Cuban orphan, a Spanish jai alai champion and more in a would-be espionage ring Hemingway dubs the "Crook Factory."

But when Hemingway uncovers a critical piece of intelligence that both threatens his life and endangers the political landscape, the fate of the free world and the life of one of its most preeminent writers lies in the hands of the FBI's most ruthless agent.

Praise For The Crook Factory…

"Gutsy [and] vividly depicted ... the web of conspiracy Simmons spins, the zesty characters it entangles and its intricate cross-weave of fact and fiction distinguish this celebration of the Hemingway centenary."
—Publishers Weekly

"Filled with crackerjack writing, a page-turning plot,and characters who will haunt the reader long after the book is finished...Terrific."—San Antonio Express-News

"A remarkable book...The stand-out thriller of the year."—Milwaukee Journal Sentinel

Dan Simmons is the Hugo Award-winning author of several novels, including the New York Times bestsellers Olympos and The Terror. He lives in Colorado.
Loading...
or support indie stores by buying on