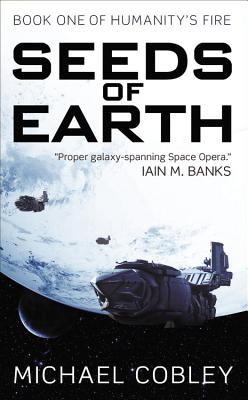 The first intelligent species to encounter mankind attacked without warning. Merciless. Relentless. Unstoppable. With little hope of halting the invasion, Earth's last roll of the dice was to dispatch three colony ships, seeds of Earth, to different parts of the galaxy. The human race would live on . . . somewhere.

150 years later, the planet Darien hosts a thriving human settlement, which enjoys a peaceful relationship with an indigenous race, the scholarly Uvovo. But there are secrets buried on Darien's forest moon. Secrets that go back to an apocalyptic battle fought between ancient races at the dawn of galactic civilization. Unknown to its colonists, Darien is about to become the focus of an intergalactic power struggle where the true stakes are beyond their comprehension. And what choices will the Uvovo make when their true nature is revealed and the skies grow dark with the enemy?

His previous books include the Shadowkings dark fantasy trilogy and Iron Mosaic, a short story collection. Seeds of Earth, The Orphaned Worlds, and The Ascendant Stars, books one, two and three of the Humanity's Fire sequence, were his first full-length forays into space opera.

Praise for the Humanity's Fire trilogy: