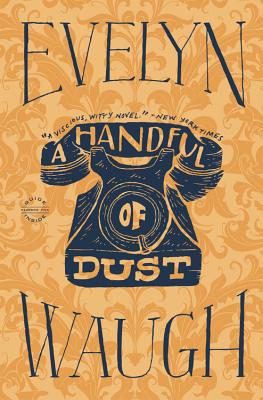 A Handful of Dust

Selected by Modern Library as one of the 100 best novels of the century, this "absolutely delightful" novel (New York Times) movingly and comically chronicles the breakdown of a marriage and the disintegration of English society in the years after World War I.
After seven years of marriage, the beautiful Lady Brenda Last has grown bored with life at Hetton Abbey, the Gothic mansion that is the pride and joy of her husband, Tony. She drifts into an affair with the shallow socialite John Beaver and forsakes Tony for the Belgravia set. In a novel that combines tragedy, comedy, and savage irony, Evelyn Waugh indelibly captures the irresponsible mood of the "crazy and sterile generation" between the wars.

Praise For A Handful of Dust…

"A story both tragic and hilariously funny, that seems to move along without aid from its author...Unquestionably the best book Mr. Waugh has written."
—Saturday Review

"The most mature and the best written novel that Mr. Waugh has yet produced."
—New Statesman & Nation

"A brilliant satirical study of the eccentric between-wars society to which Waugh belonged."
—LIFE

"Waugh treats society as a wonderland in which he plays the part of a rude, libellous, yet domestic Alice."
—V.S. Pritchett, -

Evelyn Waugh (1903-1966), whom Time called "one of the century's great masters of English prose," wrote several widely acclaimed novels as well as volumes of biography, memoir, travel writing, and journalism. Three of his novels, A Handful of Dust, Scoop, and Brideshead Revisited, were selected by the Modern Library as among the 100 best novels of the twentieth century.
Loading...
or support indie stores by buying on