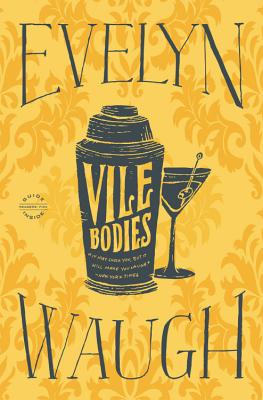 "A wickedly witty and iridescent novel" (Time) from one of England's greatest satirists takes aim at the generation of Bright Young Things that dominated London high society in the 1920s.
In the years following the First World War a new generation emerged, wistful and vulnerable beneath the glitter. The Bright Young Things of 1920s London, with their paradoxical mix of innocence and sophistication, exercised their inventive minds and vile bodies in every kind of capricious escapade. In these pages a vivid assortment of characters, among them the struggling writer Adam Fenwick-Symes and the glamorous, aristocratic Nina Blount, hunt fast and furiously for ever greater sensations and the hedonistic fulfillment of their desires. Evelyn Waugh's acidly funny satire reveals the darkness and vulnerability beneath the sparkling surface of the high life.

"It may shock you, but it will make you laugh."
—New York Times

"A hectic piece of savage satire....I laughed until I was driven out of the room."
—V.S. Pritchett, The Spectator

"Evelyn Waugh is a satirist, no doubt, but not a skeptic, for he believes, and proves, that amusement can be depriced from the most unpromising material, from people, that is, whose one occupation in life is the quest for amusement, people who give and attend parties."
—Saturday Review

"A savage study in public and private morals....It is uproarious. It is also ferocious."
—John K. Hutchens, New York Times