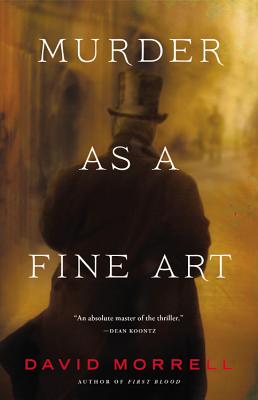 Murder as a Fine Art (Thomas and Emily De Quincey #1)

A brilliant historical mystery series begins: in gaslit Victorian London, writer Thomas De Quincey must become a detective to clear his own name.

Thomas De Quincey, infamous for his memoir Confessions of an English Opium-Eater, is the major suspect in a series of ferocious mass murders identical to ones that terrorized London forty-three years earlier.

The blueprint for the killings seems to be De Quincey's essay On Murder Considered as One of the Fine Arts. Desperate to clear his name but crippled by opium addiction, De Quincey is aided by his devoted daughter Emily and a pair of determined Scotland Yard detectives.

In Murder as a Fine Art, David Morrell plucks De Quincey, Victorian London, and the Ratcliffe Highway murders from history. Fogbound streets become a battleground between a literary star and a brilliant murderer, whose lives are linked by secrets long buried but never forgotten.

"Masterful...brilliantly plotted....evokes 1854 London with such finesse that you'll gear the hooves clattering on cobblestones, the racket of dustmen, and the shrill call of vendors."—Tina Jordan, Entertainment Weekly (Grade: A)

"Shockingly real...Morrell's thorough and erudite research of the people and culture of the British Empire's heyday informs every page. A literary thriller that pushes the envelope of fear."—Waka Tsunoda, Associated Press

"The most daring and original thriller of the year hands down . . . The master at work in truly wondrous display here in a richly atmospheric, darkly hypnotic tale . . . Morrell's brilliant rendition of a long gone place and time evokes the best of Edgar Allen Poe and Arthur Conan Doyle." --Providence Journal

"Everything [Morrell] writes has a you-are-there quality, and that, combined with his ability to propel characters through a scene, makes reading him like attending a private screening."—Washington Post Book World

"Brilliant. Everything works--the horrifying depiction of the murders, the asides explaining the impact of train travel on English society, nail-biting action sequences--making this book an epitome of the intelligent page-turner."—Publishers Weekly (starred review)

" Murder as a Fine Art is a masterpiece-I don't use that word lightly-a fantastic historical thriller, beautifully written, intricately plotted, and populated with unforgettable characters. It brilliantly re-creates the London of gaslit streets, fogs, hansom cabs, and Scotland Yard. If you liked The Alienist, you will absolutely love this book. I was spellbound from the first page to last."

David Morrell is an Edgar and Anthony Award finalist, a Nero and Macavity winner, and recipient of the prestigious career-achievement ThrillerMaster award from the International Thriller Writers. He has written twenty-nine works of fiction, which have been translated into thirty languages. He is also a former literature professor at the University of Iowa and received his PhD from Pennsylvania State University.