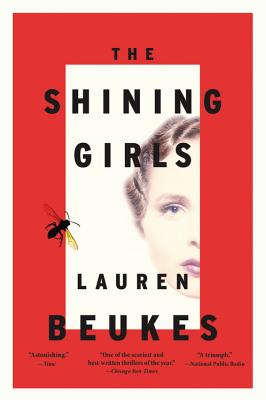 “Utterly original, beautifully written, and I must say, it creeped the holy bejasus out of me. This is something special.” —Tana French

Praise For The Shining Girls: A Novel…

One of the best crime books of the decade! (CrimeReads)

"One of the scariest and best-written thrillers of the year, not to mention the most memorable portrait of a serial killer since Henry H. Holmes in....Erik Larson's 2003 nonfiction bestseller The Devil in the White City."—Chicago Sun-Times

"A triumph ... [T]he smart and spunky Kirby Mizrachi is as exciting to follow as any in recent genre fiction ... [E]ach chapter in which [Harper] appears holds a reader's attention, especially the sharply described murder scenes - some of which read as much like starkly rendered battlefield deaths out of Homer as forensic reconstructions of terrible crimes ... This book means business."—NPR.org

"[Beukes is] so profusely talented - capable of wit, darkness, and emotion on a single page - that a blockbuster seems inevitable....The Shining Girls marks her arrival as a major writer of popular fiction."—USA Today

"The premise is pure Stephen King, but Beukes gives it an intricate, lyrical treatment all her own."—Time

"THE SHINING GIRLS is utterly original, beautifully written, and I must say, it creeped the holy bejasus out of me. This is something special."—Tana French

"A tremendous work of suspense fiction. What's more, it's a fabulous piece of both time-travel and serial killer fiction, using the intersection of those two themes to explore questions of free will, predestination, and causality in a mind-melting, heart-pounding mashup that delivers on its promise."—Cory Doctorow, Boing Boing

"I loved THE SHINING GIRLS. It really is a new kind of thriller, sitting somewhere between The Time Traveller's Wife and The Silence of The Lambs. A dark, relentless, time-twisting, page-turning murder story guaranteed to give you heart palpitations. It shines."—Matt Haig, author of The Radleys

"Very smart...completely kick-ass. Beukes' handling of the joints between the realistic and the fantastic is masterful, and those are always my favorite parts, in this kind of story. Not the weirdness (which is itself superb here, and very ample) but the segue to it. The liminal instant."—William Gibson

"One of the summer's hottest books."—Wired.com

Lauren Beukes writes novels, comics and screeplays. She's the author of the critically-acclaimed international bestseller Broken Monsters; The Shining Girls, about a time traveling serial killer; Zoo City, a phantasmagorical Joburg noir and winner of the 2011 Arthur C Clarke Award; and the neo-political thriller Moxyland. She worked as a journalist and as show runner on one of the South Africa's biggest animated TV shows, directed an award-winning documentary, and wrote the New York Times bestselling graphic novel, Fairest: The Hidden Kingdom. She lives in Cape Town, South Africa.
Loading...
or support indie stores by buying on