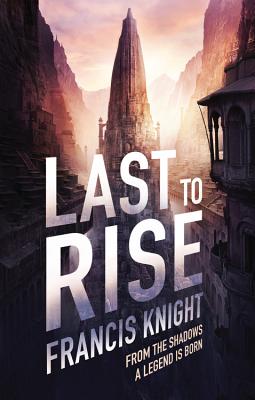 The towering vertical city of Mahala is on the brink of war with its neighboring countries. It might be his worst nightmare, but Rojan and the few remaining pain mages have been drafted in to help.

The city needs power in whatever form they can get it -- and fast. With alchemists readying a prototype electricity generator, and factories producing guns faster than ever, the city's best advantage is still the mages. Tapping their power is a risky plan, but with food in the city running out, and a battle brimming that no one is ready for, risky is the best they've got. . .

The spectacular conclusion to the adventures of Rojan Dizon, which began with the thrilling fantasy debut Fade to Black.

Praise For Last to Rise (A Rojan Dizon Novel #3)…

"The series, which has grown in complexity since the beginning, reaches a profoundly moving conclusion that is both unexpected and entirely satisfying."
—Publishers Weekly

"It's powerfully written, with a beautifully realized dystopian world and some thoroughly engaging characters."
—Booklist

"The world building is crazy interesting... I'm very excited to read the second in the series!"
—Felicia Day on Fade to Black

"Full of fierce energy, fast-paced and inventive."
—Adrian Tchaikovsky on Fade to Black

"A great fantasy debut... The beginning of something really quite brilliant... very highly recommended."
—Civilian Reader (UK) on Fade to Black