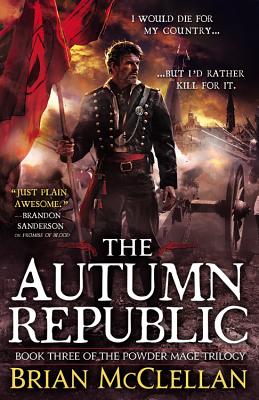 Tamas, Taniel, and Adamat have been betrayed and Adro now lies in the hands of a foreign invader. But it remains the duty of the powder mages to defend their homeland unto death in the explosive conclusion the Brian McClellan's Powder Mage trilogy.

The capital has fallen. . .

Field Marshal Tamas returns to his beloved country to find that for the first time in history, the capital city of Adro lies in the hands of a foreign invader. His son is missing, his allies are indistinguishable from his foes, and reinforcements are several weeks away.

With the Kez still bearing down upon them and without clear leadership, the Adran army has turned against itself. Inspector Adamat is drawn into the very heart of this new mutiny with promises of finding his kidnapped son.

And Taniel Two-shot, hunted by men he once thought his friends, must safeguard the only chance Adro has of getting through this war without being destroyed. . .

The Autumn Republic is the epic conclusion that began with Promise of Blood and The Crimson Campaign.

Praise For The Autumn Republic (The Powder Mage Trilogy #3)…

"A slam-bang conclusion to an outstanding trilogy."
—Kirkus on The Autumn Republic

"This book is just plain awesome. I found myself enjoying every moment of it. Innovative magic, quick-paced plot, interesting world. I had a blast."
—Brandon Sanderson, New York Times bestselling author on Promise of Blood

"The world of the privileged sorcerers and the strange abilities of the powder mages who can manipulate gunpowder are just as well drawn in this captivating universe."
—RT Book Reviews (4 1/2 stars) on Promise of Blood

"Brings a welcome breath of gunpowder-tinged air to epic fantasy."
—Anthony Ryan on Promise of Blood

"McClellan's fitting conclusion to the trilogy which introduced an amazing world of rival traditions of magic at war with one another, a world of blood-soaked battlefields, gunpowder-snorting powder mages, and gods who can't help interfering in the mortal world."
—Library Journal on The Autumn Republic

Brian McClellan is an American epic fantasy author from Cleveland, Ohio. He is known for his acclaimed Powder Mage novels and essays on the life and business of being a writer. Brian now lives in Utah with his wife, Michele.
Loading...
or
Not Currently Available for Direct Purchase