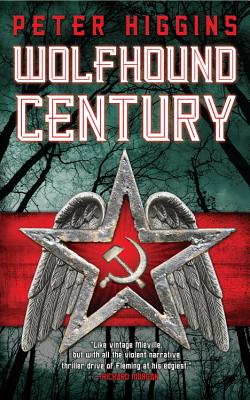 Investigator Vissarion Lom has been summoned to the capital in order to catch a terrorist -- and ordered to report directly to the head of the secret police.

A totalitarian state, worn down by an endless war, must be seen to crush home-grown insurgents with an iron fist. But Lom discovers Mirgorod to be more corrupted than he imagined: a murky world of secret police and revolutionaries, cabaret clubs and doomed artists.

Lom has been chosen because he is an outsider, not involved in the struggle for power within the party. And because of the sliver of angel stone implanted in his head.

Peter Higgins read English at Oxford and was Junior Research Fellow at Wolfson College before joining the Civil Service. He began writing fantasy and SF stories in 2006 and his work has appeared in Fantasy: Best of the Year 2007 and Best New Fantasy 2. He has been published by Asimov's Science Fiction, Fantasy Magazine, and Zahir. His short story "Listening for Submarines" was translated and published by the St. Petersburg-based literary magazine Esli. He is married with three children and lives in South Wales.

"An amazing, fast-paced story in a fantasy world poised dangerously on the edge of quantum probability, a world where angels war with reality"—Peter F. Hamilton

"Sentient water, censored artists, mechanical constructs, old-fashioned detective work, and the secret police are all woven together in this rich and fascinating tapestry."—Publishers Weekly

"I absolutely loved WOLFHOUND CENTURY. Higgins's world is a truly original creation, Russian cosmism and Slavic mythology filtered through steampunk and le Carre. What really captured me was his beautiful style and language: his metaphors and associations flow smoothly like the waters of the Mir, and, like Lom without his angel stone, make you see the world in a new way."
—Hannu Rajaniemi


"Like vintage Mieville or Vandermeer, but with all the violent narrative thriller drive of Fleming at his edgiest. I fell into Wolfhound Century and devoured it in three days flat.Peter Higgins is a great discovery, a gifted writer with a route map to some fascinating new dark corners of the imagination, and a fine addition to the contemporary fantasy canon."
—Richard Morgan

"A brilliant exploitation of the power of fantasy: the tender green soul of Russian history set free for uncanny battle with its grey, gunmetal carapace."—Francis Spufford
or
Not Currently Available for Direct Purchase
Copyright © 2020 American Booksellers Association