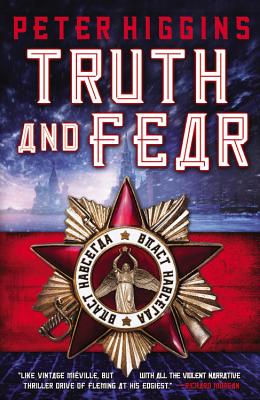 Truth and Fear (The Wolfhound Century #2)

Investigator Lom returns to Mirgorod and finds the city in the throes of a crisis. The war against the Archipelago is not going well. Enemy divisions are massing outside the city, air raids are a daily occurrence and the citizens are being conscripted into the desperate defense of the city.

But Lom has other concerns. The police are after him, the mystery of the otherworldly Pollandore remains and the vast Angel is moving, turning all of nature against the city.
But will the horrors of war overtake all their plans?

Praise For Truth and Fear (The Wolfhound Century #2)…

"An amazing, fast-paced story in a fantasy world poised dangerously on the edge of quantum probability, a world where angels war with reality"
—Peter F. Hamilton on Wolfhound Century

"Like vintage Mieville or Vandermeer, but with all the violent narrative thriller drive of Fleming at his edgiest. I fell into Wolfhound Century and devoured it in three days."—Richard Morgan

"A dark new Soviet alternative history with angels...an alternate history that will grab you by the lapels and snap you to attention."
—io9.com on Wolfhound Century

"[Wolfhound Century] captures its world with absolute conviction. Mirgorod is a city of crumbling infrastructure and frightened people, but it is also a living, breathing, and very much vital place, that lives in its narrow streets and filthy river and in the overwhelming sense of cold that becomes more oppressive every time somebody shivers in daylight or huddles in a doorway for protections. There's brutality and heroism in equal portions."—SciFi Magazine on Wolfhound Century

"I absolutely loved Wolfhound Century. Higgins's world is truly original creation, Russian cosmos and Slavic mythology filtered through steampunk and le Carre. What really captured me was his beautiful style and language: his metaphors and associations flow smoothly like the waters of the Mir, and, like Lom without his angel stone, make you see the world in a new way."
—Hannu Rajaniemi on Wolfhound Century

"A compelling Stalin-era alternate Russia ... An ambitious and fascinating novel."
—Booklist on Truth and Fear