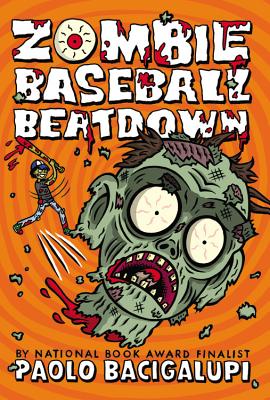 In this inventive, fast-paced novel, New York Times bestselling and Printz Award-winning author Paolo Bacigalupi takes on hard-hitting themes--from food safety to racism and immigration--and creates a zany, grand-slam adventure that will get kids thinking about where their food comes from.

The zombie apocalypse begins on the day Rabi, Miguel, and Joe are practicing baseball near their town's local meatpacking plant and nearly get knocked out by a really big stink. Little do they know the plant's toxic cattle feed is turning cows into flesh-craving monsters! The boys decide to launch a stealth investigation into the plant's dangerous practices, unknowingly discovering a greedy corporation's plot to look the other way as tainted meat is sold to thousands all over the country. With no grownups left they can trust, Rabi and his friends will have to grab their bats to protect themselves (and a few of their enemies) if they want to stay alive...and maybe even save the world.

"Printz-winning Bacigalupi writing a middle-grade zombie novel? Yes, it really happened, and yes, it's pretty darn good....Simultaneously smart, funny, and icky, this book asks a tough question: Is it worth looking the other way in order to save yourself?"—Booklist

"A high-energy, high-humor look at the zombie apocalypse....a signal alert to young teens to think about what they eat....sure to be appreciated by middle school zombie cognoscenti."—Kirkus Reviews

"Defies the expectations of the comedy-horror genre, turning this zombie novel into an effective bit of social commentary while staying true to the story's grisly and goofy roots....Casual readers will have a blast, and those who look deeper will learn something, too."—Publishers Weekly

"It's a testament to the author's skill that [the characters] express values of courage, friendship, and integrity as naturally as they toss off hilarious observations....[A] fast-paced home run."—School Library Journal

"[Introduces] reluctant readers to activism through literature.... a dark comedy with a bit of heart."—The Bulletin

Paolo Bacigalupi is the author of the highly acclaimed The Drowned Cities, Tool of War, and Ship Breaker, a New York Times bestseller, Michael L. Printz Award winner, and National Book Award finalist. He is also the author of the Edgar Awards nominee The Doubt Factory; a novel for younger readers, Zombie Baseball Beatdown; and two bestselling adult novels for adults, The Water Knife and The Windup Girl. His first work of collected short fiction was Pump Six and Other Stories. He co-wrote The Tangled Lands with Tobias S. Buckell. The winner of the Hugo, Nebula, Locus, Compton Crook, John W. Campbell Memorial, and Theodore Sturgeon Memorial Awards, he lives in western Colorado with his wife and son. The author invites you to visit his website at windupstories.com.