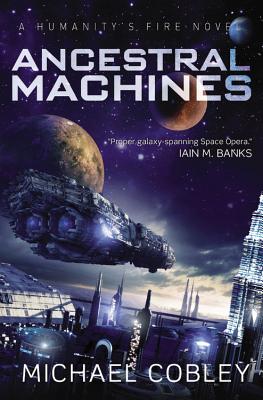 A new standalone epic space opera, set in the same world as the Humanity's Fire trilogy.
No world is safe.

The Warcage: two hundred worlds harnessed to an articial sun in a feat of unprecedented stellar engineering. Built to travel through space as a monument to peace between alien species, now its voracious rulers have turned it into a nightmarish wasteland, capturing new planets for slaves and resources, then discarding the old.

Now, when a verdant agri-world is pulled out of its orbit, the captain of a smuggler ship must journey into the Warcage to rescue his crew.

"The invention is endless."
—SFX on Seeds of Earth

"Seeds of Earth has everything: well-realised extraterrestrials, scheming artificial intelligences, set-piece space battles and bizarre technology from the dawn of the galaxy."
—The Guardian (UK) on Seeds of Earth

"Space opera has never been in more capable hands."
—The Guardian (UK) on The Orphaned Worlds

"Michael Cobley has added a fine piece of work to a grand tradition."
—SF Crow's Nest on The Ascendant Stars

His previous books include the Shadowkings dark fantasy trilogy and Iron Mosaic, a short story collection. Seeds of Earth, The Orphaned Worlds, and The Ascendant Stars, books one, two and three of the Humanity's Fire sequence, were his first full-length forays into space opera.
Loading...
or
Not Currently Available for Direct Purchase