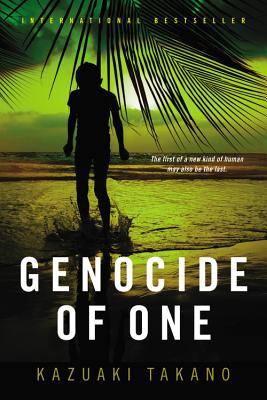 The internationally bestselling, award-winning Japanese thriller about a child who may be the future of the human race -- or the cause of its extinction.

During a briefing in Washington D.C., the President is informed of a threat to national security: a three-year-old boy named Akili, who is already the smartest being on the planet. Representing the next step in human evolution, Akili can perceive patterns and predict future events better than most supercomputers, and is capable of manipulating grand-scale events like pieces on a chess board. And yet, for all that power, Akili has the emotional maturity of a child -- which might make him the most dangerous threat humanity has ever faced.

An American soldier, Jonathan Yeager, leads an international team of elite operatives deep into the heart of the Congolese jungle under Presidential orders to destroy this threat to humanity before Akili's full potential can be realized. But Yeager has a very sick child, and Akili's advanced knowledge of all things, medicine included, may be Yeager's only hope for saving his son's life. Soon Yeager finds himself caught between following his orders and saving a creature with a hidden agenda, who plans to either save humanity as we know it -- or destroy it.

Praise For Genocide of One: A Thriller…

"Smart, fast-paced and surprising . . . Genocide of One pivots on the idea of an evolved superhuman, but uses that as a springboard to examine the boundaries of our own emotions and morals. . . . A thoughtful novel that asks some big questions [and] also a delightfully complex work of suspense fiction that keeps readers guessing. There are loads of large-scale secrets to be worked out--some highly personal, others that will affect the future of humanity--and figuring out how, who's really who and how these globally based individuals all connect into the whole is all part of the fun."—Catherine Mallette, Fort Worth Star-Telegram

"This is an exciting thriller, drawing us in. . . . The translation, by Philip Gabriel, is fluid and compelling."—Booklist

Kazuaki Takano studied Film Studies at Los Angeles City College and has worked for many years as a scriptwriter in Japan. Genocide of One is his first novel to be translated into English.
Loading...
or support indie stores by buying on