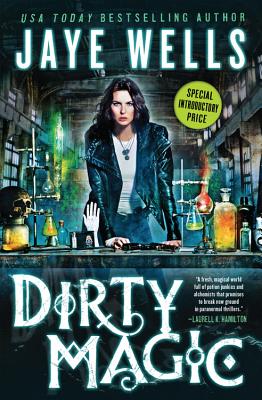 Action-packed police procedural meets dark urban fantasy in a world where cops and wizards are fighting a war over addictive, dangerous, and illegal dirty magic.

Magic is a drug. Careful how you use it.

The last thing patrol cop Kate Prospero expected to find on her nightly rounds was a werewolf covered in the blood of his latest victim. But then, she also didn't expect that shooting him would land her in the crosshairs of the Magic Enforcement Agency, who want to know why she killed their lead snitch.

The MEA keeps dirty magic off the streets, but there's a new blend out there that's as deadly as it is elusive. The more Prospero learns about the investigation, the more she's convinced that earning a spot on their task force is the career break she's been wanting. But getting the assignment proves much easier than solving the case. Especially once the investigation reveals their lead suspect is the man she walked away from ten years earlier-on the same day she swore she'd given up dirty magic for good.

Kate Prospero's about to learn the hard way that crossing a wizard will always get you burned, and that when it comes to magic, you should never say never.

"Dirty Magic is like nothing else currently happening in urban fantasy. Grim, gritty, and great."—Seanan McGuire

"Jaye Wells raises the urban fantasy bar with DIRTY MAGIC, a hard-boiled series debut as unique and surprising as the creatures and characters peopling it. Kate Prospero is charged with policing the Cauldron, a magical world so fully realized, and so gritty, it gets under your nails. Wells is known for deftly weaving non-stop action with no-holds barred humor, but the unique and deeply drawn relationships are the real alchemy here. DIRTY MAGIC showcases seasoned pro, Wells, at the top of her game, and establishes newcomer Kate Prospero as the urban fantasy heroine to beat."
—New York Times Bestseller Vicki Pettersson

"Hold on tight -- a gritty new heroine has joined the pantheon of shoot-first, ask-questions-later protagonists."—RT Book Reviews on Red-Headed Stepchild

"The next coming of Laurell K. Hamilton and Kim Harrison."—www.bn.com on The Mage in Black

Raised in Texas, USA Today bestselling author Jaye Wells grew up reading everything she could get her hands on. Her penchant for daydreaming was often noted by frustrated teachers. She embarked on a series of random career paths, including stints working for a motivational speaker and at an art museum. Jaye eventually realized that while she loved writing, she found facts boring. So, she left all that behind to indulge her overactive imagination and make stuff up for a living. Besides writing, she enjoys travel, art, history, and researching weird and arcane subjects. She lives in Texas with her saintly husband and devilish son. Find out more about Jaye Wells at www.jayewells.com.
Loading...
or
Not Currently Available for Direct Purchase