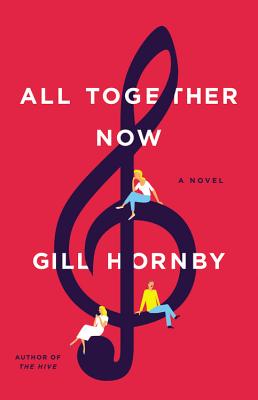 The small town of Bridgeford is in crisis. Downtown is deserted, businesses are closing, and the idea of civic pride seems old-fashioned to residents rushing through the streets to get somewhere else. Bridgeford seems to have lost its heart.

But there is one thing that just might unite the community -- music. The local choir, a group generally either ignored or mocked by most of Bridgeford's inhabitants, is preparing for an important contest, and to win it they need new members, and a whole new sound. Enlisting (some may say drafting) singers, who include a mother suffering from empty-nest syndrome, a middle-aged man who has just lost his job and his family, and a nineteen-year-old waitress who dreams of reality-TV stardom, the choir regulars must find -- and make -- harmony with neighbors they've been happy not to know for years. Can they all learn to work together, save the choir, and maybe even save their town in the process?

All Together Now is a poignant and charming novel about community, family, falling in love -- and the big rewards of making a small change.

Praise For All Together Now: A Novel…

Praise for ALL TOGETHER NOW:

"This snappy comedy of suburban manners among the middle-aged is as heartwarming as a catchy pop song and as carefully arranged as classical choral music."
—Library Journal

"The genuine charm in Hornby's work lies in her ability to see the wonderfully absurd, the humorously petty and the magical about the everyday moments in life...a funny underdog tale that is transporting and yet honest. Best of all, this unique and surprisingly meaningful tale unfolds alongside a soundtrack that is sure to leave readers with a song in their hearts."

"Hornby's characters are just a bit sharp in all the right ways, making for a pleasant read that, against your will, may have you humming."
—Kim Ode, The Minneapolis Star Tribune

PRAISE FOR THE HIVE:

"The Hive is Mean Girls for moms. It begins as a tart vivisection of mother culture: the invidious comparisons, the one-upping, the compliments that insult. Yet in the tradition of the best satire, which engenders a fondness for its target even as it skewers, The Hive made me fall in love with these women, each flawed and interesting, trying in her own way to be herself. You won't be able to resist picking a favorite, or casting the book from your own circle of friends (or even your book club). Escape to someone else's social snarls for a few hours, and enjoy this brilliantly witty, wonderfully warm serving of mama drama."—Lydia Netzer, author of New York Times Notable Book of the Year Shine Shine Shine

"With a wicked eye and a giant heart, Gill Hornby weaves a lively and hilarious tale that's pure fun. If you loved Bridget Jones's Diary and you have a child in school, The Hive is the book for you."—Maria Semple, author of Where'd You Go, Bernadette

"The familiar notion that a group of women behaves like a hive is developed here into an enjoyable acerbic social commentary on mean girls of all ages, lightened by touches of hen lit."
—Library Journal (starred review)

"The Hive maintains a healthy dose of humor within the mothers' characters. The novelist's British impersonations of the characters are hilarious ...The Hive is a refreshing read because the Brits have perfectly constructed sentences, so enviably precise...The Hive is a fun and witty read, one that everyone can relate to. As life evolves, we naturally evaluate our relationships and our contributions to them. Hornby gives us yet another fictional experience of how our relationships affect us, and how we can survive them."—The Aspen Times

Proponents of career-centered feminism, such as Leslie Bennetts, often stress the financial and other dangers of leaving the workplace. What happens to your negotiating abilities? Do political antennae grow dull? For that answer, look no further than Gill Hornby (who, for the record, has "absolutely no view" on how other women should live) and yet who has, after "a good 16, 17 years of not going out there," produced a sophisticated commercial novel about what she knows that is deeply plugged in to our zeitgeist.
—The Daily Beast

"Hornby's debut novel, it says on the cover, is already a sensation, the book every publisher wanted. It deserves all of it really, for the richness of the concept."—The Guardian

"Hornby's combining of 'the sticky stuff' and the daily ups and downs is marvelously conveyed - altogether delish."
—The Spectator

"Clever and witty...Anyone who has ever found themselves picked last for games or not invited for lunch will shudder with recognition."
—Sunday Times (London)

Gill Hornby is the author of the novel The Hive as well as several nonfiction books. She lives in Berkshire, England with her husband and their four children.
Loading...
or
Not Currently Available for Direct Purchase