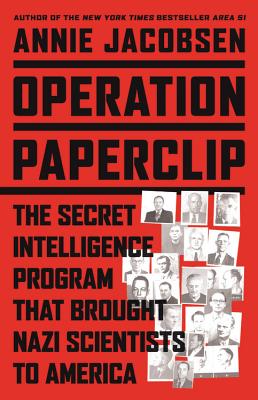 One of The Boston Globe's Best Books of 2014

One of iBooks' Top Ten Nonfiction Books of the Year

"As comprehensive as it is critical, this latest expose from Jacobsen is perhaps her most important work to date.... Jacobsen persuasively shows that it in fact happened and aptly frames the dilemma.... Rife with hypocrisy, lies, and deceit, Jacobsen's story explores a conveniently overlooked bit of history." -- Publishers Weekly (starred)

"Darkly picaresque.... Jacobsen persuasively argues that the mindset of the former Nazi scientists who ended up working for the American government may have exacerbated Cold War paranoia."—New Yorker

"An engrossing and deeply disturbing exposé that poses ultimate questions of means versus ends." -- Booklist (starred)

"Annie Jacobsen's Operation Paperclip is a superb investigation, showing how the U.S. government recruited the Nazis' best scientists to work for Uncle Sam on a stunning scale. Sobering and brilliantly researched." -- Alex Kershaw, author of The Liberator

"Throughout, the author delivers harrowing passages of immorality, duplicity and deception, as well as some decency and lots of high drama. How Dr. Strangelove came to America and thrived, told in graphic detail." -- Kirkus Reviews

"[A] gripping, always disquieting story of a nation forced to trade principle for power.... Jacobsen gives us many vivid moments.... OPERATION PAPERCLIPtakes its place in the annals of Cold War literature, one more proof that moral purity and great power can seldom coexist."—Chris Tucker, The Dallas Morning News

"Jacobsen uses newly released documents, court transcripts, and family-held archives to give the fullest accounting yet of this endeavor." -- The New York Post

Annie Jacobsen is the author of the national bestsellers Area 51, Operation Paperclip, and Surprise, Kill, Vanish, the Pulitzer Prize finalist The Pentagon's Brain, and Phenomena. She was a contributing editor at the Los Angeles Times Magazine. She is a graduate of Princeton University and lives in Los Angeles with her husband and two sons.
Loading...
or
Not Currently Available for Direct Purchase