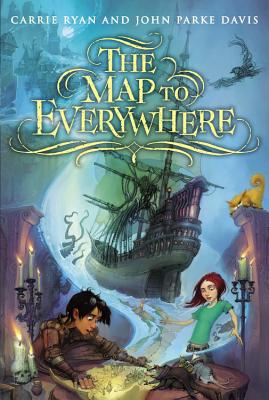 The Map to Everywhere

To Master Thief Fin, an orphan from the murky pirate world of the Khaznot Quay, the Map is the key to finding his mother. To suburban schoolgirl Marrill, it's her only way home after getting stranded on the Pirate Stream, the magical waterway that connects every world in creation. With the help of a bumbling wizard and his crew, they must scour the many worlds of the Pirate Stream to gather the pieces of the Map to Everywhere--but they aren't the only ones looking. A sinister figure is hot on their tail, and if they can't beat his ghostly ship to find the Map, it could mean the destruction of everything they hold dear!

Heart-pounding escapades and a colorful cast of characters will have readers setting sail through this wholly original and unforgettable tale.

Praise For The Map to Everywhere…

Husband and wife Carrie Ryan and John Parke Davis have been in love with each other's writing (and with each other) since meeting in law school a decade ago. Carrie is the New York Times bestselling author of the critically acclaimed and multi-award-winning Forest of Hands and Teeth series, which is based on a world she and JP created together. She is also the author of Daughter of Deep Silence and Infinity Ring: Divide and Conquer, and the editor of Foretold: 14 Tales of Prophecy and Prediction. JP is the First Assistant Federal Defender for the Western District of North Carolina, as well as a published author of short fiction. Although they've been important parts of each other's writing for years, the Map to Everywhere series is their first full collaboration. They live in Charlotte, North Carolina, and they invite you to visit their website at TheMaptoEverywhere.com.
Loading...
or
Not Currently Available for Direct Purchase