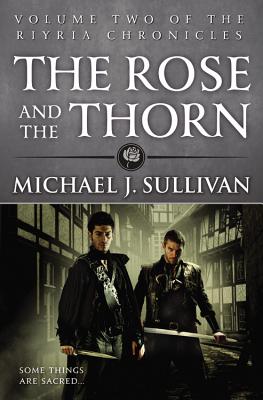 The Rose and the Thorn (The Riyria Chronicles #2) (Paperback)

For more than a year Royce Melborn has tried to forget Gwen DeLancy, the woman who saved him and his partner Hadrian Blackwater from certain death. Unable to get her out of his mind, Royce returns to Medford with Hadrian but the two receive a very different reception --- Gwen refuses to see them. The victim of abuse by a powerful noble, she suspects that Royce will ignore any danger in his desire for revenge. By turning the thieves away, Gwen hopes to once more protect them. What she doesn't realize is what the two are capable of --- but she's about to find out.
Chronological Order

Born in Detroit, Michigan, Michael J. Sullivan has lived in Vermont, North Carolina, and Virginia. He worked as a commercial artist and illustrator, founding his own advertising agency in 1996, which he closed in 2005 to pursue writing full-time. The Crown Conspiracy is his first published work. He currently resides in Fairfax, Virginia with his wife and three children. The author's website can be found at www.riyria.com and on twitter @author_sullivan.

Praise For The Rose and the Thorn (The Riyria Chronicles #2)…

"The arrival of a master storyteller... A winning debut for fantasy lovers."—Library Journal on Theft of Swords