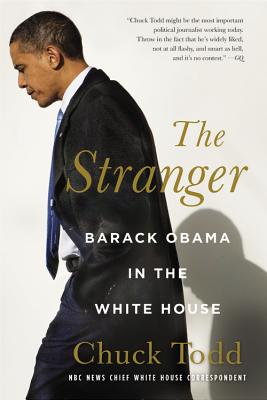 Barack Obama in the White House

Chuck Todd's gripping, fly-on-the-wall account of Barack Obama's tumultuous struggle to succeed in Washington.
Barack Obama won the presidency in 2008 partly because he was a Washington outsider. But if he'd come to the White House thinking he could change the political culture, he soon discovered just how difficult it was to swim against an upstream of insiders, partisans, and old guard networks allied to undermine his agenda---including members of his own party. He would pass some of the most significant legislation in American history, but his own weaknesses torpedoed some of his greatest hopes.

In THE STRANGER, Chuck Todd draws upon his unprecedented inner-circle sources to create a gripping account of Obama's White House tenure, from the early days of drift and helplessness to a final stand against the GOP in which an Obama, at last liberated from his political future, finally triumphs.

Chuck Todd is the Chief White House Correspondent and Political Director of NBC News, and a contributing editor to "Meet the Press". He also serves as NBC News' on-air political analyst for "NBC Nightly News with Brian Williams," "Today," "Meet the Press," and such MSNBC programs as "Morning Joe" and "Hardball with Chris Matthews." Before joining NBC News, Todd was editor-in-chief of National Journal's "The Hotline," Washington's premier daily briefing on America politics. He has also written Op-Ed pieces for the New York Times and the Washington Post and for the Atlantic Monthly, where he is a contributing editor. He is the co-author of How Barack Obama Won: A State-by-State Guide to the Historic 2008 Presidential Election (Vintage, 2009). He teaches a graduate political communications course at Johns Hopkins University.
or
Buy Here
Copyright © 2020 American Booksellers Association