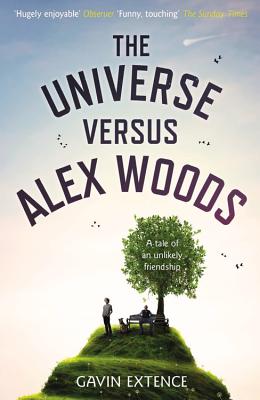 The Universe Versus Alex Woods

A rare meteorite struck Alex Woods when he was ten years old, leaving scars and marking him for an extraordinary future. The son of a fortune teller, bookish, and an easy target for bullies, Alex hasn't had the easiest childhood.

But when he meets curmudgeonly widower Mr. Peterson, he finds an unlikely friend. Someone who teaches him that that you only get one shot at life. That you have to make it count.

So when, aged seventeen, Alex is stopped at customs with 113 grams of marijuana, an urn full of ashes on the front seat, and an entire nation in uproar, he's fairly sure he's done the right thing . . .

Introducing a bright young voice destined to charm the world, The Universe Versus Alex Woods is a celebration of curious incidents, astronomy and astrology, the works of Kurt Vonnegut and the unexpected connections that form our world.

Praise For The Universe Versus Alex Woods…

"The great joy of this quirky novel is Alex Woods, an English boy who's been hit by a meteorite. Alex recounts what follows with charm and wit, even when it includes seizures, bullying and the grave illness of his best friend, an old man. Pulsing with humor and insight, this book is a delight."—People Magazine

"Warm and funny and tragic and uplifting all in one. Extence should be on everyone's radar."—Jasper Fforde

"Perfectly crafted and beautifully written... The Universe Versus Alex Woods may be a debut novel but it is an outstanding novel by any standards. Unforgettable."—Red (UK)

"With wit and warmth, Gavin Extence shines a light on one of the darkest, most difficult subjects of our times."—Sunday Express

"A bittersweet, cross-audience charmer, this debut novel will appeal to guys, YA readers, and Vonnegut and coming-of-age fiction fans."—Library Journal

"The Universe Versus Alex Woods will put you through the wringer. But oh, what a wringer!"—NPR Books -- Included on their "5 Great Summer Reads for Teens" List

"[The Universe Versus Alex Woods is] done in a dark, offbeat style that brings to mind the characters' hero, the literary giant Kurt Vonnegut"—New York Post

"Clever storytelling, winning characters and nuanced rhythm... Alex is a precocious, endearing, infuriating and unexpectedly brilliant teenager, and he and his indelible voice are incapable of sticking on the road most traveled. Lucky us: We get to go along for the (sometimes bumpy) ride."—Denver Post

"The Universe Versus Alex Woods is the story of how misfit Alex comes to befriend an elderly American curmudgeon, learns to cultivate marijuana and develops a deep appreciation for the work of Kurt Vonnegut. It's a wonderful coming-of-age story, delivered in an offhand casual style that belies the deeply moral concerns of the author."—Arkansas Democrat-Gazette

"Precocious and awkward, Alex Woods truly is a welcome addition to the literary world."—Charleston City Paper

"If you enjoy interesting and unique experiences, you will find this to be the must-read of the summer...[The Universe Versus Alex Woods] is a must-have for your library, and a treat for both the young, as well as the young at heart. There is some very deep subject matter discussed, yet the end result is extraordinary. Gavin Extence is an author to watch for."—Seattle Post-Intelligencer

Gavin Extence was born in 1982 and grew up in the interestingly named village of Swineshead, England. From the ages of 5-11, he enjoyed a brief but illustrious career as a chess player, winning numerous national championships and travelling to Moscow and St. Petersburg to pit his wits against the finest young minds in Russia. He won only one game.

Gavin now lives in Sheffield with his wife, baby daughter and cat. He is currently working on his next novel. When he is not writing, he enjoys cooking, amateur astronomy and going to Alton Towers.
Loading...
or support indie stores by buying on