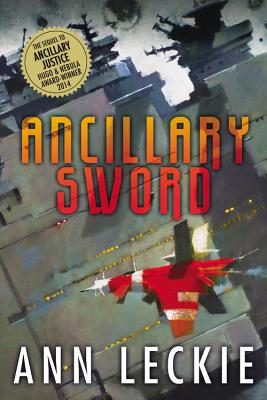 Seeking atonement for past crimes, Breq takes on a mission as captain of a troublesome new crew of Radchai soldiers, in the sequel to Ann Leckie's NYT bestselling, award-winning Ancillary Justice. A must read for fans of Ursula K. Le Guin and James S. A. Corey.

Breq is a soldier who used to be a warship. Once a weapon of conquest controlling thousands of minds, now she has only a single body and serves the emperor.
With a new ship and a troublesome crew, Breq is ordered to go to the only place in the galaxy she would agree to go: to Athoek Station to protect the family of a lieutenant she once knew -- a lieutenant she murdered in cold blood.

Ann Leckie's Imperial Radch trilogy has become one of the new classics of science fiction. Beautifully written and forward thinking, it does what good science fiction does best, taking readers to bold new worlds with plenty explosions along the way.

"The sort of space opera audiences have been waiting for."—NPR Books

"Breq's struggle for meaningful justice in a society designed to favor the strong is as engaging as ever. Readers new to the author will be enthralled, and those familiar with the first book will find that the faith it inspired has not been misplaced."—Publishers Weekly

"Leckie proves she's no mere flash in the pan with this follow-up to her multiple-award-winning debut space opera, Ancillary Justice."—Kirkus

"This follow-up builds on the world and characters that the author introduced in the first book and takes the story in new directions. There is much more to explore in Leckie's universe, one of the most original in SF today."—Library Journal (starred review)

"An ambitious space opera that proves that Justice was no fluke.... a book every serious reader of science fiction should pick up."—RT Book Reviews

"Superb... Sword proves that [Leckie]'s not a one-hit wonder. I look forward to the rest of Breg's tale."—St. Louis Post-Dispatch

"A gripping read, with top-notch world building and a set of rich subtexts about human rights, colonialism -- and (yes) hive mind sex."—io9

"Leckie investigates what it means to be human, to be an individual and to live in a civilized society."—Scientific American

"Ancillary Justice is the mind-blowing space opera you've been needing...This is a novel that will thrill you like the page-turner it is, but stick with you for a long time afterward."—io9 (included in 'This Fall's Must-Read Science Fiction and Fantasy Books')

"It's not every day a debut novel by an author you'd never heard of before derails your entire afternoon with its brilliance. But when my review copy of Ancillary Justice arrived, that's exactly what it did. In fact, it arrowed upward to reach a pretty high position on my list of best space opera novels ever."—Liz Bourke on Ancillary Justice

"Establishes Leckie as an heir to Banks and Cherryh."—Elizabeth Bear on Ancillary Justice

"A double-threaded narrative proves seductive, drawing the reader into the naive but determined protagonist's efforts to transform an unjust universe. Leckie uses...an expansionist galaxy-spinning empire [and] a protagonist on a single-minded quest for justice to transcend space-opera conventions in innovative ways. This impressive debut succeeds in making Breq a protagonist readers will invest in, and establishes Leckie as a talent to watch."—Publishers Weekly on Ancillary Justice

"Using the format of SF military adventure blended with hints of space opera, Leckie explores the expanded meaning of human nature and the uneasy balance between individuality and membership in a group identity. Leckie is a newcomer to watch as she expands on the history and future of her new and exciting universe."—Library Journal on Ancillary Justice

"A sharply written space opera with a richly imagined sense of detail and place, this debut novel from Ann Leckie works as both an evocative science fiction tale and an involving character study...it's also a strongly female-driven piece, tackling ideas about politics and gender in a way that's both engaging and provocative...Ancillary Justice is a gripping read that's well worth a look."—SFX (UK) on Ancillary Justice

"It engages, it excites, and it challenges the way the reader views our world. Leckie may be a former Secretary of the Science Fiction Writers of America, but she's the President of this year's crop of debut novelists. Ancillary Justice might be the best science fiction novel of this very young decade."—Justin Landon, Staffer's Book Review on Ancillary Justice

"Total gamechanger. Get it, read it, wish to hell you'd written it. Ann Leckie's Ancillary Justice may well be the most important book Orbit has published in ages."—Paul Graham Raven on Ancillary Justice

"The sort of book that the Clarke Award wishes it had last year ... be prepared to see Ancillary Justice bandied around a lot come awards season. (As it should be)."—Jared Shurin, Pornokitsch

Ann Leckie is the author of the Hugo, Nebula, Arthur C. Clarke, and British Science Fiction Award-winning novel Ancillary Justice. She has worked as a waitress, a receptionist, a rodman on a land-surveying crew, and a recording engineer. She lives in St. Louis, Missouri.
Loading...
or support indie stores by buying on