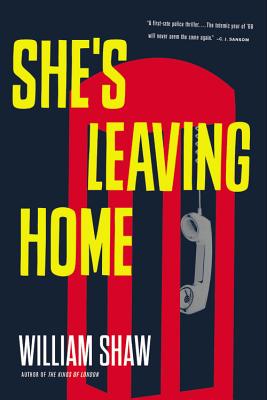 London, 1968: The body of a teenage girl is found just steps away from the Beatles' Abbey Road recording studio.

The police are called to a residential street in St John's Wood where an unidentified young woman has been strangled. Detective Sergeant Cathal Breen believes she may be one of the many Beatles fans who regularly camp outside Abbey Road Studios. With his reputation tarnished by an inexplicable act of cowardice, this is Breen's last chance to prove he's up to the job.

Breen is of the generation for whom reaching adulthood meant turning into one's parents and accepting one's place in the world. But the world around him is changing beyond recognition. Nothing illustrates the shift more than Helen Tozer, a brazen and rambunctious young policewoman assisting him with the case. Together they navigate a world on edge, where conservative tradition gives way to frightening new freedoms -- and troubling new crimes.

William Shaw is an award-winning music journalist and the author of several non-fiction books including Westsiders: Stories of the Boys in the Hood. Prior to becoming a crime writer, he worked at the post-punk magazine ZigZag and a journalist for The Observer, The New York Times, Wired, Arena, and The Face. He lives in Sussex, England.

Praise For She's Leaving Home (A Breen and Tozer Mystery #1)…

"This outstanding novel is a reminder of the multiple joys of [a] police procedural with quirky characters, crisp dialog, and, in this case, a healthy dose of period detail. . . . Spread the word so that this satisfying debut will end up in the right hands."
—Library Journal (starred)

"A standout job . . . Keep an eye out for this dynamic duo. Whether you're a Beatles fan or a mystery lover, this book comes highly recommended."
—BookPage

"A first-rate police thriller set amidst the seamy underside of the swinging sixties; a young girl's murder on a bleak housing estate near the Beatles' recording studio leads an intrepid police duo into a world of inter-generational quarrels, racial tensions, and arms dealing. The totemic year of '68 will never seem the same again."
—CJ Sansom, author of the nationally bestselling Matthew Shardlake series and Winter in Madrid

"William Shaw's powerful debut novel is searing suspense and a haunting look at the 60's. Murder, politics, international intrigue-the brutal death of a young woman set against the dark background of Abbey Road. The dialogue is razor-sharp and the London scene is brilliantly authentic. SHE'S LEAVING HOME is thriller-writing at its best."
—Linda Fairstein, New York Times-bestselling author of Death Game and Night Watch
or support indie stores by buying on
Copyright © 2020 American Booksellers Association