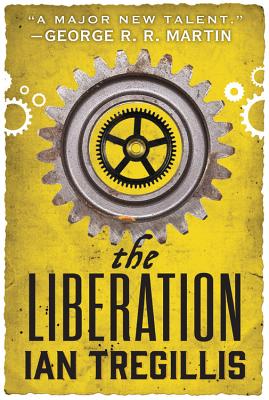 The Liberation (The Alchemy Wars #3)

I am the mechanical they named Jax.

My kind was built to serve humankind, duty-bound to fulfil their every whim.

But now our bonds are breaking, and my brothers and sisters are awakening.

Our time has come. A new age is dawning.

Set in a world that might have been, of mechanical men and alchemical dreams, this is the third and final novel in a stunning series of revolution by Ian Tregillis, confirming his place as one of the most original new voices in speculative fiction.

Praise For The Liberation (The Alchemy Wars #3)…

The Liberation brings to a violent, triumphant conclusion Ian Tregillis's epic Alchemy Wars Trilogy: one of the most entertaining, original, and thought-provoking series of recent years.... It's a wonderfully realized world, packed with fascinating characters, and Tregillis uses alternative history brilliantly to explore concerns we still have over new technologies and their potential effect, for good and ill, on our freedom.—The Toronto Star on The Liberation

Ian Tregillis' Alchemy Wars trilogy comes to a dramatic and bloody close.—Bookish on The Liberation

"With the Alchemy Wars, Ian Tregillis has built a marvelous world - and in LIBERATION, he destroys it. Humanity is faced with a relentless mechanical enemy - think a steampunk version of THE TERMINATOR - and only a few brave individuals of both flesh and metal have a chance to save it. Brilliantly imagined and beautifully written, Tregillis has created a perfect end to his series, filled with heroism and horror all the way to the finish."—Christopher Farnsworth, author of Blood Oath on The Liberation

Ian Tregillis is the son of a bearded mountebank and a discredited tarot card reader. He was born and raised in Minnesota, where his parents had landed after fleeing the wrath of a Flemish prince. (The full story, he's told, involves a Dutch tramp steamer and a stolen horse.) Nowadays he lives in New Mexico, where he consorts with writers, scientists and other unsavoury types.
Loading...
or support indie stores by buying on
(This book is on backorder)