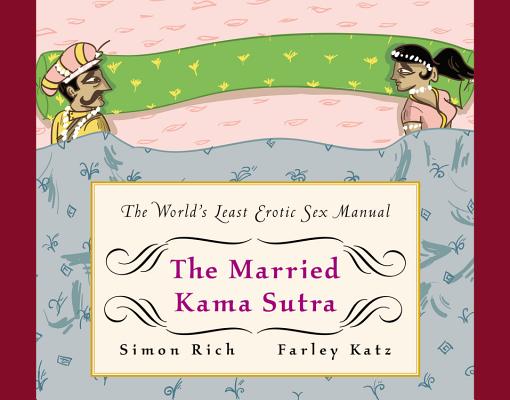 An illustrated "sequel" to the famous Kama Sutra: a humorous guide to the positions of married life.

For centuries, lovers have found inspiration and advice in the ancient text of the Kama Sutra. Now, Simon Rich -- "one of the funniest writers in America" (The Daily Beast) -- and Farley Katz have unearthed a valuable new document: a guide to the positions most common after marriage. From "the interrupted congress" to "the beaching of the whales," here are the poses, positions, and games married lovers play to keep the spark alive -- and the dishwasher properly loaded.

Complete with four-color, full-page illustrations in the style of the original Kama Sutra, but with modern, domestic accoutrements: dirty diapers, TV remotes, and wine glasses aplenty.

"A hilarious look at conjugal bliss amidst life with the kids, the dishwasher, and other post-nuptial trappings." -- The San Antonio Express-News

"Simon Rich and Farley Katz capture several vignettes in this perfect-as-a-stocking-stuffer gift for your favorite couple." --- The New York Times—-

"The long married...may find more satisfaction in this not-so-sexy but quite hilarious volume." - More—-

"We could go on and on about the stratospherically accomplished, Brooklyn-based funnymen behind a new, illustrated ode to modern love, The Married Kama Sutra (Little, Brown). It's a too-true-to-life parody of sex after marriage, with witty depictions of the behaviors couples fall into that render the phrase 'long-term romance' oxymoronic." -- Elyse Moody, Elle

Praise for WHAT IN GOD'S NAME: