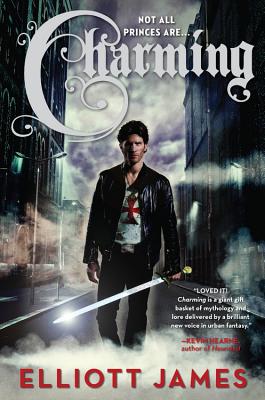 Sharp, sarcastic, and efficiently lethal, John Charming is set to join the ranks of your favorite fast-talking anti-heroes like Dean Winchester and Harry Dresden in the first book of this page-turning urban fantasy series.

John Charming isn't your average Prince...
He comes from a line of Charmings -- an illustrious family of dragon slayers, witch-finders and killers dating back to before the fall of Rome. Trained by a modern day version of the Knights Templar, monster hunters who have updated their methods from chain mail and crossbows to Kevlar and shotguns, John Charming was one of the best--until a curse made him one of the abominations the Knights were sworn to hunt.
That was a lifetime ago. Now, John tends bar under an assumed name in rural Virginia and leads a peaceful, quiet life. That is, until a vampire and a blonde walked into his bar...
CHARMING is the first novel in a new urban fantasy series which gives a new twist to the Prince Charming tale.
Pax Arcana
Charming
Daring
Fearless
In Shining Armor
Legend Has It
Short Fiction in the Pax Arcana world:
Charmed I'm Sure
Don't Go Chasing Waterfalls
Pushing Luck
Surreal Estate
Dog-Gone
Bulls Rush In
Talking Dirty

An army brat and gypsy scholar, ELLIOTT JAMES is currently living in the Blue Ridge mountains of southwest Virginia. An avid reader since the age of three (or that's what his family swears anyhow), he has an abiding interest in mythology, martial arts, live music, hiking, and used bookstores.

"The Pax Arcana books are seriously good reads. Action, humor, and heart with unexpected twists and turns. If you are (like me) waiting for the next Butcher or Hearne--pick up Elliott James. Then you can bite your nails waiting for the next James, too."—Patricia Briggs, New York Times #1 bestselling author of the Mercy Thompson series

"Loved it! Charming is a giant gift basket of mythology and lore delivered by a brilliant new voice in urban fantasy. Elliott James tells stories that are action-packed, often amusing, and always entertaining."—Kevin Hearne, author of Hounded

"I loved this book from start to finish. Exciting and innovative, Charming is a great introduction to a world I look forward to spending a lot more time in."—New York Times bestselling author Seanan McGuire

"James's world is rich and complex and well worth diving into."—Richard Kadrey

"In a saturated literary realm, James's tale stands out for the gritty, believable world he builds... This is masculine urban fantasy in the vein of Jim Butcher and Mark del Franco."—Booklist

"Grab some snacks and settle back as splendid debut author James serves up a Prince Charming tale yanked sideways. John Charming comes from a prominent line of dragon slayers, witch-finders and killers trained by the Knights Templar, but now he has a problem: He has become what they hunt. James' reluctant hero faces threats and danger with a smart-ass attitude that keeps the narrative fast paced, edgy and amusing. Mark this name down -- you will undoubtedly be seeing more from James!"—RT Book Reviews

"This debut introduces a self-deprecating, wisecracking, and honorable-to-a-fault hero who can stand up to such established protagonists as Jim Butcher's Harry Dresden and Seanen McGuire's October Daye. Combining action and romance -- with an emphasis on action -- this is a top-notch new series opener for lovers of urban fantasy."—Library Journal (Starred review)
or
Not Currently Available for Direct Purchase
Copyright © 2020 American Booksellers Association