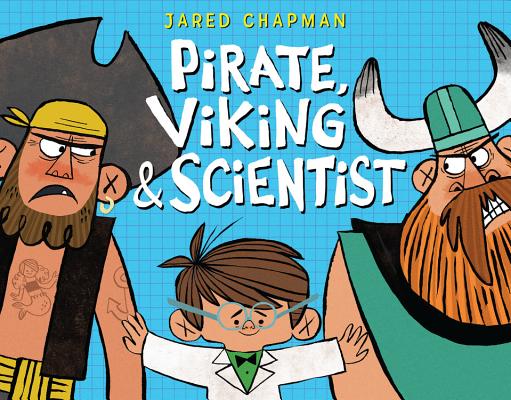 In this funny story that's perfect for fans of Ada Twist, Scientist, a determined little boy won't rest until he proves his theory that you really can have more than one best friend!

Pirate is friends with Scientist.

Scientist is friends with Viking.

Pirate and Viking are NOT friends.

What can Scientist do?

Use his brain, of course--and the scientific method! He forms a hypothesis, conducts an experiment, observes his results, and tests his subjects again and again until he discovers the perfect formula for friendship.

"A clear triumph for the scientific method....as funny as it is sneakily informative."—Kirkus Reviews

"The accessible text, silly premise, and simple yet accurate incorporation of scientific principles make this a unique gem for elementary collections.... This is a great read-aloud to foster discussions around the scientific process and important lessons about friendship. An excellent addition."—School Library Journal

"With boisterous drawings...and a preface providing key terms in the scientific method, it's great inspiration for classroom science units or at-home Venn-diagramming."—Publishers Weekly

"From the informative endpapers to the graph paper backgrounds, readers will be absorbed by every playful scientific detail. Terrific choice for classrooms and read-alouds to introduce themes of friendship and science."
—Booklist

Jared Chapman is the creator of Pirate, Viking & Scientist; Steve, Raised by Wolves; Vegetables in Underwear; and Fruits in Suits. He has also illustrated Be Glad Your Dad...(Is Not an Octopus!) by Matthew Logelin and Sara Jensen and Wordplay by Adam Lehrhaupt. He has worked for Walt Disney Television Animation, Nick Jr., Hallmark, and The Hollywood Reporter, among others. He lives in Texas.
Loading...
or
Not Currently Available for Direct Purchase