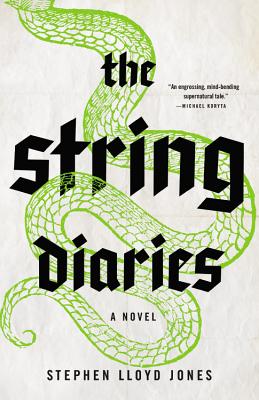 A family is hunted by a centuries-old monster: a man with a relentless obsession who can take on any identity.

The String Diaries opens with Hannah frantically driving through the night -- her daughter asleep in the back, her husband bleeding out in the seat beside her. In the trunk of the car rests a cache of diaries dating back 200 years, tied and retied with strings through generations. The diaries carry the rules for survival that have been handed down from mother to daughter since the 19th century. But how can Hannah escape an enemy with the ability to look and sound like the people she loves?

Stephen Lloyd Jones's debut novel is a sweeping thriller that extends from the present day, to Oxford in the 1970s, to Hungary at the turn of the 19th century, all tracing back to a man from an ancient royal family with a consuming passion -- a boy who can change his shape, insert himself into the intimate lives of his victims, and destroy them.

If Hannah fails to end the chase now, her daughter is next in line. Only Hannah can decide how much she is willing to sacrifice to finally put a centuries-old curse to rest.

Praise For The String Diaries…

"The String Diaries is terrifying, and deliciously so . . . A sophisticated horror story that induces elemental terror. It's perfect for the beach, particularly since you don't want to be alone with it in the dark."—Sherryl Connelly, New York Daily News

"This is a book of authorial wizardry, as Jones hopscotches among three time periods and locales (late 1800s Hungary; 1970s France and England; and present-day Snowdonia, in northern Wales) with grace, wit and dexterity."
—Joy Tipping, Dallas Morning News

"Jones doles out his narrative revelations with patience, turning over his cards deliberately like a well-trained casino dealer."
—Entertainment Weekly

"The String Diaries is an engrossing, mind-bending supernatural tale, and Stephen Lloyd Jones is as exciting a new voice as I've come across in some time, a writer who understands what makes the pulse race."—Michael Koryta, author of Those Who Wish Me Dead

"I have never read a book with such frenzied impatience. The String Diaries is unputdownable. Stephen Lloyd Jones has written a debut novel as frightening and layered as Elizabeth Kostova's The Historian and as clever and riveting as Dan Brown's The Da Vinci Code."—Benjamin Percy, author of Red Moon, The Wilding and Refresh, Refresh

"Reading The String Diaries made me feel, in the best sense, like a child again. Nothing was more important than the fate of Stephen Lloyd Jones's courageous and very human heroine Hannah Wilde. Meals went uncooked, bills went unpaid, as I waited to find out if she would win freedom for herself and her daughter against the forces of darkness. I was scared, enthralled and amazed by this stunning debut."—Margot Livesey, author of the New York Times bestselling The Flight of Gemma Hardy

"I loved this book."
—Marcus Sakey, author of Brilliance

Stephen Lloyd Jones studied at Royal Holloway College, University of London and now lives in Surrey with his wife, three young sons, and far too many books. He is the author of The String Diaries.
Loading...
or
Not Currently Available for Direct Purchase