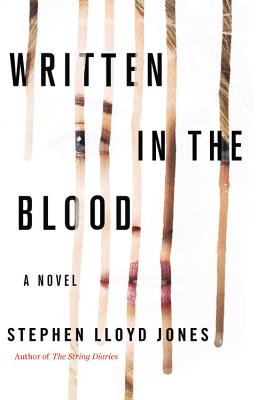 Written in the Blood (Hardcover)

See the girl. Leah Wilde is twenty-four, a runaway on a black motorbike, hunting for answers while changing her identity with each new Central European town.

See the man, having come of age in extraordinary suffering and tragedy in nineteenth-century Budapest: a witness to horror, to love, to death, and the wrath of a true monster. Izsv°k still lives in the present day, impossibly middle-aged. He's driven not only to hunt this immortal evil but to find his daughter, stolen from an Arctic cabin and grown into the thing Izsv°k has sworn to kill.

See the monster, a beautiful, seemingly young woman who stalks the American West, seeking the young and the strong to feed upon, desperate to return to Europe where her coven calls.

Written in the Blood is the epic thriller of the year, a blazing and dexterous saga spanning generations, and threading the lives of five individuals driven by love, by sacrifice, by hunger and by fear. They seek to save a race -- or to extinguish it forever.

Stephen Lloyd Jones studied at Royal Holloway College, University of London and now lives in Surrey with his wife, three young sons, and far too many books. He is the author of The String Diaries.

Praise For Written in the Blood…

"Stephen Lloyd Jones' 2014 debut novel, The String Diaries, was a stunning, supernatural ride. His 2015 follow-up, Written in the Blood, surpasses that success, greatly expanding the world and mythology he created in an even bigger, more ambitious and more fully-realized tale. . . . A sprawling, suspenseful and massively engrossing tale, Written in the Blood spans centuries and perspectives to paint a portrait of the rise and fall of a species that incorporates politics, grudges, romance, treachery, struggle and intrigue, all masterfully spun around a handful of connected players. It's a rich story that has the detail and precision of a scholastic study thrust upon the suspense and visual grandeur of a cinematic thriller."—Brooke Wylie, Examiner.com

"The pace is so fast that readers are essentially propelled through the book, carried from one character to another, bouncing around from one place in the world to another, completely caught up in the story. A novel that's just as good as the one that came before-and, in this case, that means essential reading for devotees of high-end sf."
—Booklist (starred review)

PRAISE FOR THE STRING DIARIES:
"Terrifying, and deliciously so . . . A sophisticated horror story that induces elemental terror. It's perfect for the beach, particularly since you don't want to be alone with it in the dark."
—New York Daily News

"The String Diaries is an engrossing, mind-bending supernatural tale, and Stephen Lloyd Jones is as exciting a new voice as I've come across in some time, a writer who understands what makes the pulse race."—Michael Koryta, author of Those Who Wish Me Dead
or
Not Currently Available for Direct Purchase
Copyright © 2020 American Booksellers Association