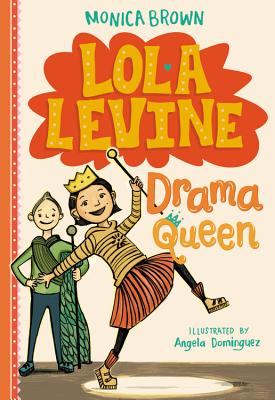 Seven-year-old Lola Levine is fierce on the soccer field. She can do a slide tackle (although she's not supposed to) and even likes gooey worms. Nothing scares Lola! That is, until she is auditioning in front of EVERYONE for her class play. After Lola is overcome with stage fright, she's cast as Squirrel #2, a non-speaking part!

Lola is more than a little disappointed, and she looks to her bubbe for advice and comfort. But on opening night, the curtain rises, and she finds herself smack in the middle of an exasperating turn of events.

In this fun and heartfelt chapter book, can Lola give Squirrel #2 her own special stamp and make it a play to remember?

"Readers will find much to love in Lola and her nurturing family. Dominguez's illustrations provide just the right touch to enhance the story."—School Library Journal

"Readers who first met Lola in Lola Levine Is Not Mean will be pleased to see her in a new role. This sequel should win her new fans."—Booklist

Monica Brown is the author of many award-winning books for children, including Waiting for the Biblioburroand Marisol McDonald Doesn't Match/ Marisol McDonald no combina. Her books have received starred reviews, Pura Belpre honors, Americas Awards, an NCTE Orbis Pictus honor, and a Christopher Award. Monica's books are inspired by her Peruvian and Jewish heritages and her desire to bring diverse stories to children. Monica is a professor of English at Northern Arizona University. She lives in Arizona with her husband and two daughters. Her website is monicabrown.net.

Angela Dominguez was born in Mexico City, grew up in the great state of Texas, and now lives in Brooklyn. She is the author and illustrator of Knit Together, Let's Go, Hugo!, Maria Had a Little Llama, and Santiago Stays
Loading...
or support indie stores by buying on