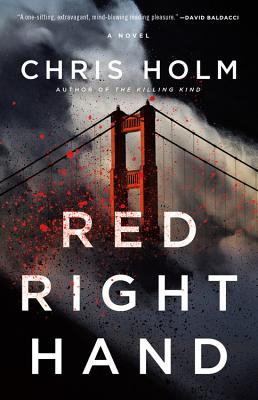 If the good guys can't save you, call a bad guy.

When viral video of an explosive terrorist attack on San Francisco's Golden Gate Bridge reveals that a Federal witness long thought dead is still alive, the organization he'd agreed to testify against will stop at nothing to put him in the ground.

FBI Special Agent Charlie Thompson is determined to protect him, but her hands are tied; the FBI's sole priority is catching the terrorists before they strike again. So Charlie calls the only person on the planet who can keep her witness safe: Michael Hendricks.

Once a covert operative for the US military, Hendricks makes his living hitting hitmen... or he did, until the very organization hunting Charlie's witness -- the Council -- caught wind and targeted the people he loves. Teaming up with a young but determined tech whiz, Cameron, on the condition she leave him alone after the case, Hendricks reluctantly takes the job.

Of course, finding a man desperate to stay hidden is challenging enough without deadly competition, let alone when the competition's shadowy corporate backer is tangled in the terrorist conspiracy playing out around them. And now Hendricks is determined to take the Council down, even if that means wading into the center of a terror plot whose perpetrators are not what they seem.

Chris Holm is the author of the Collector trilogy, which blends crime and fantasy, and the Michael Hendricks thrillers. His Hendricks novel, The Killing Kind, was named a New York Times Editors' Choice and won the Anthony Award for Best Novel. His second Hendricks novel, Red Right Hand, was nominated for the Anthony Award for Best Novel. Holm lives in Portland, Maine.

NOMINATED FOR THE ANTHONY AWARD FOR BEST NOVEL—-

"A one-sitting, extravagant, mind-blowing reading pleasure. Chris Holm has created a story of rare, compelling brilliance, with a concept so high you'll need oxygen to finish it."
—David Baldacci

"In his second Michael Hendricks thriller, Holm performs authorial acrobatics, elegantly and nimbly leaping between various locations and voices to produce not just a suspenseful tale kicked off by a San Francisco terrorist attack, but one imbued with multiple fine characters to boot."
—The Boston Globe

"Thumbs up, we say. Thumbs up, then lick those thumbs and use them to turn the pages--quickly now, to find out what happens next."
—Wayne Alan Brenner, Austin Chronicle

"Holm succeeds in developing Michael Hendricks as a complexly conflicted protagonist, while keeping the level of action and intrigue running high. Smart, unpredictable, and well-constructed... a satisfying thriller on its own terms and likely a harbinger of pulse-quickening adventures still to come."
—Portland Press Herald

"This follow-up to the acclaimed The Killing Kind is a real thrill ride. Jeff Abbott fans and adrenaline fiction junkies will appreciate how vividly the shadowy world of military contractors comes to life in Holm's skillful hands."—Library Journal (starred review)

"This story fairly leaps from the blocks. . . . The Killing Kind earned a stack of plaudits, but Red Right Hand is the rare second entry in a series that actually rivals its predecessor."—Kirkus Reviews

"A fast-paced, action-packed adventure, with several surprising twists to add to the excitement."
—CentralMaine.com

"Like most people in Crime Fiction Land, I've been hearing about the talented Chris Holm for some time--and now I understand why. Red Right Hand is a rare treat--a tightly constructed, crisply written, fast-as-hell thriller. Strap in tight because the chapters whip by in a blur. Such is the view from a roller coaster."—Gregg Hurwitz, New York Times bestselling author of Orphan X
or
Not Currently Available for Direct Purchase
Copyright © 2020 American Booksellers Association