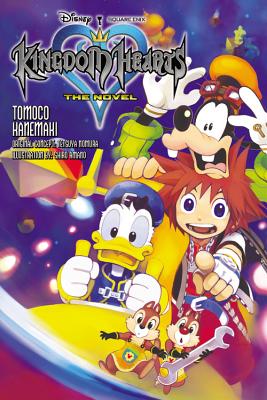 On the Destiny Islands, three children--Sora, Riku, and Kairi--are living out their peaceful, carefree lives while yearning for whatever lies beyond the great ocean. But one night, an unexpected disaster takes place, and the three are torn from each other and their island home. Meanwhile, at Disney Castle, Donald Duck and the other castle residents are in an uproar upon discovering King Mickey has suddenly gone missing. When fate brings them together, Sora, Donald, and Goofy set out on a grand Disney adventure to find their friends!

Shiro Amano is an artist and illustrator best known for his manga adaptation of the KINGDOM HEARTS series. Tetsuya Nomura is best known as the character designer for the critically acclaimed Final Fantasy video game series, as well as the head developer for the massively popular, Disney-crossover, Kingdom Hearts video game franchise. Tomoco Kanemaki is the author behind the novel adaptations of the massively popular Kingdom Hearts game franchise.
or support indie stores by buying on
Copyright © 2020 American Booksellers Association