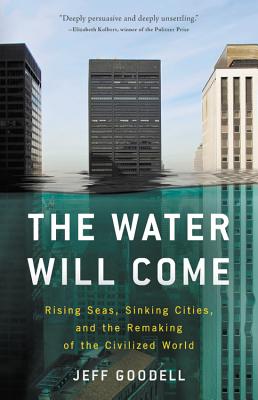 The Water Will Come

Rising Seas, Sinking Cities, and the Remaking of the Civilized World

What if Atlantis wasn't a myth, but an early precursor to a new age of great flooding? Across the globe, scientists and civilians alike are noticing rapidly rising sea levels, and higher and higher tides pushing more water directly into the places we live, from our most vibrant, historic cities to our last remaining traditional coastal villages. With each crack in the great ice sheets of the Arctic and Antarctica, and each tick upwards of Earth's thermometer, we are moving closer to the brink of broad disaster.

By century's end, hundreds of millions of people will be retreating from the world's shores as our coasts become inundated and our landscapes transformed. From island nations to the world's major cities, coastal regions will disappear. Engineering projects to hold back the water are bold and may buy some time. Yet despite international efforts and tireless research, there is no permanent solution-no barriers to erect or walls to build-that will protect us in the end from the drowning of the world as we know it.

The Water Will Come is the definitive account of the coming water, why and how this will happen, and what it will all mean. As he travels across twelve countries and reports from the front lines, acclaimed journalist Jeff Goodell employs fact, science, and first-person, on-the-ground journalism to show vivid scenes from what already is becoming a water world.

"An immersive, mildly gonzo and depressingly well-timed book about the drenching effects of global warming, and a powerful reminder that we can bury our heads in the sand about climate change for only so long before the sand itself disappears." (Jennifer Senior, New York Times)

Praise For The Water Will Come: Rising Seas, Sinking Cities, and the Remaking of the Civilized World…

Praise for The Water Will Come

"Jeff Goodell's latest contribution to the environmental cause paints an eye-opening portrait of humankind's dilemma as temperatures -- and sea levels -- continue to rise. The Water Will Come brings together compelling anecdotes from all over the globe and shocking expert assessments that should make the world's few remaining skeptics reconsider. Read this book for a reminder of the stakes -- right now, today -- and why we have to work harder, faster, to address the climate challenge."—John F. Kerry

"Jeff Goodell has taken on some of the most important issues of our time, from coal mining to geoengineering. In The Water Will Come, he explains the threat of sea level rise with characteristic rigor and intelligence. The result is at once deeply persuasive and deeply unsettling."—Elizabeth Kolbert, Pulitzer Prize-winning and New York Times bestselling author of The Sixth Extinction

"Once you've read an excellent book about climate change, which Jeff Goodell's The Water Will Come most certainly is, you can never unremember the facts... Goodell has been writing about climate change for many years... he's the real deal, committed and making house calls."—Jennifer Senior, The New York Times

"This harrowing, compulsively readable, and carefully researched book lays out in clear-eyed detail what Earth's changing climate means for us today, and what it will mean for future generations... It's a thriller in which the hero in peril is us."—John Green

"Sea level rise is coming. We know this as clearly as we know thermometer measurements, the melting point of ice, and the law of thermal expansion. Jeff Goodell's book cuts through the fossil-fuel lies, and is a warning I hope we heed while there's still time."
—Senator Sheldon Whitehouse

"A deeply reported and very well-written account of how rising sea levels are reshaping our world. Goodell has written a powerful call to arms that is never preachy but is a very timely reminder that we ignore how climate change is raising sea levels only at great risk to our way of life."
—Peter Bergen, author of United States of Jihad and Manhunt

"Even if we could halt further growth in greenhouse gas emissions today, we would remain locked into several centuries of sea level rise ahead. Jeff Goodell's The Water Will Come shows us how this stark truth will unfold, right down to individual human experiences."—Laurence C. Smith, author of The World in 2050

"For people who want to learn more about climate change, rising sea levels and what it means for our future, read The Water Will Come."—Chris Hayes, MSNBC

"If there was ever a moment when Americans might focus on drainage, this is it. But this fine volume (which expands on [Goodell's] reporting in Rolling Stone) concentrates on the slower and more relentless toll that water will take on our cities and our psyches in the years to come."
—Bill McKibben, The Washington Post

"[A] vivid mix of science, history and sociology... Goodell talks about climate change and what it means to every person on the planet in a way that will engage even the non-Nova crowd."—USA Today

"This important [book] is absolutely brilliant scientific journalism, and certainly is a must read for all of the world's citizens."
—Forbes

"[The Water Will Come] is a well-rounded, persuasive survey.... A frightening, scientifically grounded, and starkly relevant look at how climate change will affect coastal cities."—Kirkus, Starred Review

"In this engaging book, environmental writer Goodell points out that while sea levels have always risen and fallen, the current rise is driven primarily by the dramatically accelerating melting of the arctic ice caps, and with so many cities on seashores, this will be devastating."
—Booklist, Starred Review

"An urgent, clear-eyed and downright terrifying account... Each chapter is scrupulously researched yet written in the clean and accessible style of a journalist who's perfected his craft... Persuasive, timely and vividly constructed, The Water Will Come might be one of the most essential reads of the year."—Shelf Awareness

"Goodell's journalistic writing style is engaging and will be accessible to a wide audience...[a] thought-provoking tour through our watery futures offers both challenge and inspiration."
—Jessica Lamond, Science

"A must-read... Goodell writes with insight and compassion, giving us a primer we can use to persuade neighbors, friends, and politicians to take action now."
—The Leonardo DiCaprio Foundation

"One of the most important books of the year... A potent examination not of whether seas will rise in our lifetimes, but of the fact that they will rise."
—The Sierra Club

"Cogent reportage on a world going under."
—Nature

"A journey to the cities and towns around the globe that are trying to figure out how to adapt to sea levels that are continuing to rise."
—Business Insider

"The Water Will Come is an important book, regardless of where you live. It moves the conversation from a nebulous debate on 'climate change' to a concrete set of data points that signal danger in the rising tides."—BookBrowse, Editor's Choice

"A very sobering read, underscoring how unprepared we all are for climate change."
—Nicholas Kristoff

Jeff Goodell is a contributing editor at Rolling Stone and the author of five books, including How to Cool the Planet: Geoengineering and the Audacious Quest to Fix Earth's Climate, which won the 2011 Grantham Prize Award of Special Merit. Goodell's previous books include Sunnyvale, a memoir about growing up in Silicon Valley, which was a New York Times Notable Book, and Big Coal: The Dirty Secret Behind America's Energy Future.
Loading...
or
Not Currently Available for Direct Purchase