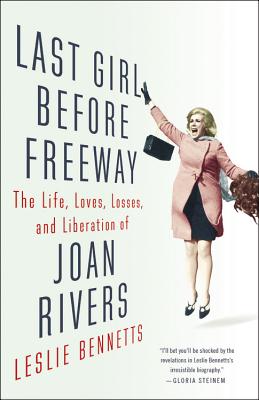 The Life, Loves, Losses, and Liberation of Joan Rivers

Named one of "40 Gifts for the Book Lover on Your List," by Good Housekeeping: The definitive book about Joan Rivers' tumultuous, victorious, tragic, hilarious, and fascinating life.

Joan Rivers was more than a legendary comedian; she was an icon and a role model to millions, a fearless pioneer who left a legacy of expanded opportunity when she died in 2014. Her life was a dramatic roller coaster of triumphant highs and devastating lows: the suicide of her husband, her feud with Johnny Carson, her estrangement from her daughter, her many plastic surgeries, her ferocious ambition and her massive insecurities.

But Rivers' career was also hugely significant in American cultural history, breaking down barriers for her gender and pushing the boundaries of truth-telling for women in public life. A juicy, intimate biography of one of the greatest comedians ever -- a performer whose sixty year career was borne, simply, out of a desire to make people laugh so she could feel loved -- Last Girl Before Freeway delves into the inner workings of a woman who both reflected and redefined the world around her.

Praise For Last Girl Before Freeway: The Life, Loves, Losses, and Liberation of Joan Rivers…

"Highly readable.... Bennetts' clear-eyed biography shows why this ambitious, 'stubbornly paradoxical' woman who 'wasn't ready to cede the spotlight' continues to command our attention. (3 out of 4 stars)"—Jocelyn McClurg, USA Today

"You may think you know Joan Rivers, but I'll bet you'll be shocked by the revelations in Leslie Bennetts's irresistible biography. Before there was a women's movement or much hope for a woman in stand-up comedy, Joan made it by ridiculing everything she craved, from beauty and respectability to fashion and power. With unmatched energy and an ambition that made Napoleon look like Gandhi, she broke the boundaries of taste and commonsense-and widened the path for us all."—Gloria Steinem

"Joan was a great friend of mine and this is one hell of a book. A terrific read from start to finish, it captures Joan completely. Five stars."—Larry King, television and radio host

"The story of Joan Rivers is also the story of the trials and tribulations faced by talented and ambitious American women for decades, and Leslie Bennetts tells her story in riveting, surprising, heart rending, and hilarious detail."—Tina Brown, author of The Diana Chronicles

"Leslie Bennetts has delivered a big, juicy biography of comedy's First Lady that takes the reader behind the scenes in the male dominated entertainment industry. That would be fascinating enough, but what stays is a portrait of a woman whose drive is fueled almost entirely on self-loathing. We know by now that most comics are in great pain-this account understands the high cost of all of those outrageous over-the-top screamingly funny classic Joan Rivers zingers."—Betsy Lerner, author of The Bridge Ladies

"[An] affectionate and entertaining bio."—O, the Oprah Magazine

"In this first detailed biography of Rivers since her death, Bennetts reveals the woman behind the schtick. It's all here.... Celebrity mavens and fans of well-written biographies will enjoy this title."—Rosellen Brewer, Library Journal

"Undeniably dishy.... A fat and full book that will satisfy fans who want all of Joan in one place."—Ilene Cooper, Kirkus Reviews

"Thoroughly researched and eminently readable.... Last Girl Before Freeway is likely to be, for our time, the definitive biography of [Rivers]."—Jonah Raskins, NY Journal of Books

"A sympathetic portrait of the scathingly funny and ambitious comedian."—Tom Beer, Newsday

"[A] frank and compelling biography.... A clear-eyed exploration of Rivers's historical and cultural significance.... Bennetts offers an important work that lifts her much-dismissed subject to her proper place in history. You can love Joan. You can hate Joan. But Last Girl Before Freeway won't let you deny her significance."—Sara Eckel, Washington Post

"Read it either as a very diverting distraction from the maelstrom of politics, or as an instruction manual for how to get off your ass, kick despair to the curb, and make lemonade out of the most sour of lemons."—Julia Felsenthal, Vogue

"In this hard-digging biography, Leslie Bennetts uncovers the scars and warts, the tall tales and the true, giving Rivers exactly the memorial she deserves."—Boris Kachka, New York Magazine

"Bennetts is a skilled reporter and writer, and she pieces together primary and secondary reporting with extraordinary skill as she unspools Rivers' life and career...I came away from Last Girl Before Freeway with a new appreciation for (Rivers) both as a groundbreaking cultural icon and formidable businesswoman. (A-)"—Tina Jordan, Entertainment Weekly

"The arrival of the first major biography of Rivers."—Lisa Levy, New Republic

"There's a lot to discuss when it comes to the polarizing Rivers...and Bennetts covers it all with aplomb. No matter how you feel about Rivers, reading this book will give you a better understanding of a woman who fought for space in a male-owned industry. Oh, and you'll laugh, too."—Steph Opitz, Marie Claire

"A welcome investigation into the circumstances that shaped this influential, raspy voiced comedienne."—Daphne Merkin, Departures

"Snappy.... The best parts of the book are tart evocations of the mid-century comic-club scene and of Rivers's inimitable panache."—New Yorker

"There's no doubt that Rivers was an interesting figure, and Bennetts' account is just as much so."—Stephanie Topacio Long, Bustle

Leslie Bennetts's biography of Rivers, Last Girl Before Freeway: The Life, Loves, Losses, and Liberation of Joan Rivers, provides an eagle-eyed view of Rivers's entire life, and the vistas are breathtaking.—Paul Constant, The Seattle Review of Books

"Revelatory....Even if you think you know 'one of the world's most uninhibited mean girls,' Bennetts has some surprises."—Jane Sumner, The Dallas Morning News

"The Rivers story is well known, but Bennetts [...] brings nuance and empathy to her remarkable life".—The Toronto Star

Leslie Bennetts is the author of the national bestseller The Feminine Mistake as well as a longtime Vanity Fair writer and former New York Times reporter. At Vanity Fair she wrote many movie star cover stories in addition to articles on subjects ranging from priest pedophilia to U.S. antiterrorism policy, and she was the first woman ever to cover a presidential campaign at the New York Times. Bennetts has also written for many other magazines, including New York, Vogue, More, The Nation, and Glamour.
Loading...
or support indie stores by buying on