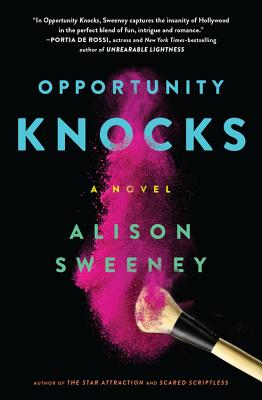 Alex Cleary has careened from one dead-end position to another. But suddenly the ingenious makeup artist finds her distinct talents are valued by none other than lifestyle-empire mogul Hillary P. -- renowned for her golden touch in broadcast and print media, as well as for her hair-trigger temper. It's a once-in-a-lifetime opportunity to join the daytime television scene that Alex is determined not to screw up.

Then a frank word in the wrong ear puts Alex's job on the line. Alex anticipates Hillary's rage, but she can't believe that this multimillionaire is holding her newest staffer to a nondisclosure agreement that demands reparation of 5 million dollars.

Alex has only 48 hours to repair the damage. And with a vengeful Hillary P. watching the clock, the devil will have her due...

Praise For Opportunity Knocks: A Novel…

"In Opportunity Knocks, Sweeney captures the insanity of Hollywood in the perfect blend of fun, intrigue, and romance."—Portia De Rossi, actress and New York Times bestselling author of Unbearable Lightness

Alison Sweeney is an award-winning actress, producer, director, TV host, and author of four previous books including the two novels: Scared Scriptless and The Star Attraction. She makes time to give back to the community, serving as the Fitness Ambassador to City of Hope and an Ambassador to Stand Up 2 Cancer. Sweeney lives in Los Angeles with her family.
Loading...
or
Not Currently Available for Direct Purchase