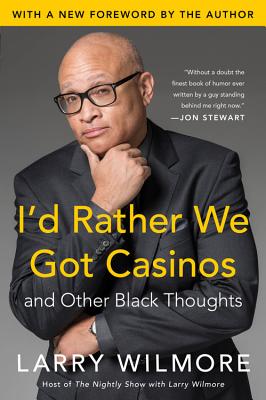 I'd Rather We Got Casinos (Paperback)

And Other Black Thoughts

From the host of Comedy Central's newest program, The Nightly Show with Larry Wilmore, comes the first paperback reprint of his funny and provocative musings on race in America and other nightly topics--updated with new material for this edition. Now boasting three new chapters and an introduction exclusive the trade paperback edition, I'd Rather We Got Casinos And Other Black Thoughts by Larry Wilmore gives Wilmore's on-screen character of the same name a place to voice his opinions on controversial topics in a way that anyone can find amusing . . . and eye-opening. Exploring various literary forms such as op-ed pieces, epistolary entries, graduation speeches, and long-lost transcripts, the result is a collection that the expanded audience from his successful Comedy Central program will enjoy, including: why black weathermen make him feel happy (or sad); why brothas don't see UFOs; letters to the NAACP; and more, including his frustration with Black History Month -- after all, can twenty-eight days of trivia really make up for centuries of oppression?"

Larry Wilmore is the host of The Nightly Show with Larry Wilmore. Prior to this, Wilmore was Senior Black Correspondent for The Daily Show with Jon Stewart. He is also an Emmy-winning writer, actor, and producer.
or
Not Currently Available for Direct Purchase
Copyright © 2020 American Booksellers Association