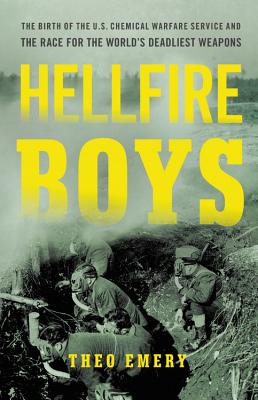 The Birth of the U.S. Chemical Warfare Service and the Race for the Worlds Deadliest Weapons

This explosive look into the dawn of chemical warfare during World War I is "a terrifying piece of history that almost no one knows" (Hampton Sides).

In 1915, when German forces executed the first successful gas attack of World War I, the world watched in horror as the boundaries of warfare were forever changed. Cries of barbarianism rang throughout Europe, yet Allied nations immediately jumped into the fray, kickstarting an arms race that would redefine a war already steeped in unimaginable horror.

Largely forgotten in the confines of history, the development of the U.S. Chemical Warfare Service in 1917 left an indelible imprint on World War I. This small yet powerful division, along with the burgeoning Bureau of Mines, assembled research and military unites devoted solely to chemical weaponry, outfitting regiments with hastily made gas-resistant uniforms and recruiting scientists and engineers from around the world into the fight.

As the threat of new gases and more destructive chemicals grew stronger, the chemists' secret work in the laboratories transformed into an explosive fusion of steel, science, and gas on the battlefield. Drawing from years of research, Theo Emery brilliantly shows how World War I quickly spiraled into a chemists' war, one led by the companies of young American engineers-turned-soldiers who would soon become known as the "Hellfire Boys." As gas attacks began to mark the heaviest and most devastating battles, these brave and brilliant men were on the front lines, racing against the clock -- and the Germans -- to protect, develop, and unleash the latest weapons of mass destruction.

Praise For Hellfire Boys: The Birth of the U.S. Chemical Warfare Service and the Race for the Worlds Deadliest Weapons…

"Through dogged reporting and a clear-eyed journey back through a world of secrets that are literally toxic, Theo Emery has dispassionately constructed an astonishing narrative of the scientists and soldiers who were tasked with winning a horrible war a century ago. Refusing to allow our modern revulsion of chemical weapons (however well-founded) to shape his extraordinary narrative, Emery--like all good historians--is determined to let the era of his subject speak for itself."—Hampton Sides, New York Times bestselling author of In the Kingdom of Ice, Ghost Soldiers, Hellhound on His Trail, and Blood and Thunder

"A fascinating and deeply researched account of how America reinvented its military--and itself--in its first modern global war. Theo Emery combines science, history, and character-driven drama to illuminate some of the darkest aspects of our national past."
—Beverly Gage, author of The Day Wall Street Exploded and Professor of History and American Studies at Yale University

"Here is a book that will burn your nostrils and make your throat close... it brims with shock and surprise... Though squarely a crackling history, Hellfire Boys is also a relevant primer on the past 100 years and on a kind of total warmaking that continues to haunt us--sometimes from another hemisphere, sometimes in our own back yard."—Dan Zak, Washington Post

"Moving crisply between stateside turf wars and battlefront combat, this well-written and well-researched slice of history will appeal to virtually any history or war buff."
—Library Journal (starred review)

"Even military buffs will learn from this intensely researched, often unnerving account.... Readers will share Emery's lack of nostalgia for this half-forgotten weapon, but they will admire this satisfying combination of technical background, battlefield fireworks, biographies of colorful major figures, and personal anecdotes from individual soldiers."
—Kirkus

"Journalist Emery offers a useful and absorbing reminder that, a century earlier, it was a different weapon of mass destruction that terrified both soldiers and civilians... This is a timely and often unsettling examination of a previously well-hidden government program."
—Booklist

"Illuminating... Emery zeroes in on a little-known and sparsely documented moment in the history of chemical warfare."
—The National Book Rivew

Theo Emery is a journalist who has written for the New York Times, the Associated Press, the Boston Globe, the Washington Post, the Tennessean, and other publications. He has appeared on NPR and WBUR in Boston. He graduated from Stanford University in 1994, and earned an MFA in Creative Nonfiction from Goucher College in 2014. He was a 2015 Alicia Patterson Foundation Fellow. He lives outside Washington, D.C.
Loading...
or
Not Currently Available for Direct Purchase