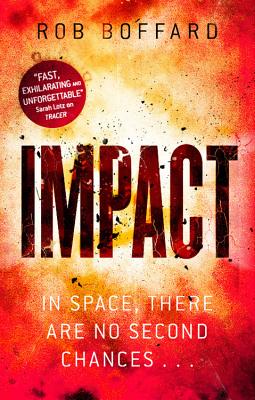 Following Tracer and Zero-G comes Impact, the explosive conclusion to the Outer Earth trilogy -- a heart-pounding thriller set in space where the hero moves like lightning and the consequences for failure are deadly.

A signal has been picked up from Earth.

The planet was supposed to be uninhabitable. But it seems there are survivors down there -- with supplies, shelter and running water. Perhaps there could be a future for humanity on Earth after all.

Riley Hale will find out soon enough. She's stuck on a spaceship with the group of terrorists that is planning to brave the planet's atmosphere and crash-land on the surface.

But when the re-entry goes wrong, Riley ends up hundreds of miles from her companions Prakesh and Carver, alone in a barren wilderness. She'll have to use everything she knows to survive.

And all of them are about to find out that nothing on Earth is what it seems . . .