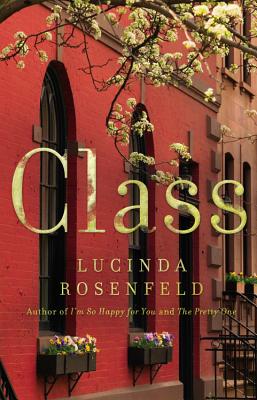 Named one of the Best Books of 2017 by the Philadelphia Inquirer: All hell breaks loose in the liberal bubble when a mother's life spirals out of control when she's forced to rethink her bleeding heart ideals.

For Karen Kipple, it isn't enough that she works full-time in the nonprofit sector for an organization that helps children from disadvantaged homes. She's also determined to live her personal life in accordance with her ideals. This means sending her daughter, Ruby, to an integrated public school in their Brooklyn neighborhood.

But when a troubled student from a nearby housing project begins bullying children in Ruby's class, the distant social and economic issues Karen has always claimed to care about so passionately begin to feel uncomfortably close to home. A daring, discussable satire about gentrification and liberal hypocrisy, Class is also a smartly written story that reveals how life as we live it -- not as we like to imagine it -- often unfolds in gray areas.

"Stiletto sharp...in a series of skillfully executed set pieces, Rosenfeld skewers the pretensions and preoccupations of women for whom "parent" is both verb and competitive sport...Ms. Rosenfeld is an astute anthropologist whose satire reaches fresh levels of absurdity."—Sarah Lyall, The New York Times

"Lucinda Rosenfeld's deliciously smart and original new novel, CLASS, had me riveted from page one. Karen Kipple's ethical dilemmas will be familiar to any urbanite with a conscience. Rosenfeld has pulled off something rare-she has shown it's possible to write a fun and juicy-yet also sincere-book about liberal guilt and social hypocrisy."—Adelle Waldman, author of The Love Affairs of Nathaniel P.

"I haven't liked being in a conflicted, bizarre, earnest, and tormented character's head this much since the time I spent with Patty Berglund in Jonathan Franzen's Freedom... CLASS is so good!!!"—Wednesday Martin, author of Primates of Park Avenue: A Memoir

"With CLASS, Lucinda Rosenfeld has written a spot-on satire of the 'new' Brooklynites as they hit the parenting phase. Her Karen Kipple is a modern-day mom driven slightly mad by the conflict between her ideals and the reality subverting them. Over anxious and underappreciated, she still strives to do the right thing, and, like most of us, doesn't always succeed. Like its protagonist, this is a smart book that also knows how to have a little fun."—Eddie Joyce, author of Small Mercies

"Rosenfeld's writing showcases the keen eye of a cultural anthropologist steeped in the rituals of the urban upper-middle class. With an acerbic wit and insight...she deftly punctures the hypocrisy that's sometimes exposed in the daunting process of trying to be true to one's professed beliefs.... A piercing take on one woman's struggle to narrow the gap between her liberal ideals and the realities of modern urban life."—Harvey Freedenberg, Shelf Awareness

"This satirical novel will have you thinking about
your own values amidst society and its hypocrisy. If you belong to a book club,
consider adding Rosenfeld's book to your roster-it will make for great
discussion."—Bella NYC

"Every time Karen Kipple...worries about keeping her daughter in a New York City public school, I want to shake her - and look in the mirror."
—The Washington Post

"CLASS is a brilliant depiction of the role of race and class in America seen through the lens of its public schools. This novel is brave, funny, and persuasive, and had me wincing like crazy with recognition. Lucinda Rosenfeld hits all the right notes."—Bliss Broyard, author of One Drop: My Father's Hidden Life-A Story of Race and Family Secrets

"A genuinely enjoyable story about a
woman who is both preposterous and recognizable and a plotline that is at once
absurd and possibly happening in your own neighbourhood at this very moment."—The Globe and Mail

Rosenfeld's attack on
upper-middle-class pieties is unerring in its aim.—New Yorker

"A take-no-prisoners racial romp and commentary on modern motherhood as told by a descendant of Tracy Flick."—Sloane Crosley, New York Times Book Review

"The story is uncomfortable and excellently handled by Rosenfeld; it invites questions about faithfulness and philanthropy, one's obligation to those less fortunate, and what it means to be middle-class in an unequal society."—Publishers Weekly

"Karen is a flawed and unlikable character, to be sure, but a certain sector of readers will identify with her-cringing all the while. Rosenfeld's sharp and searing look at race and class in urban America will make quite an impression on readers and will become an excellent book discussion selection. It will make readers uncomfortable, but for all the right reasons."—Rebecca Vnuk, Booklist (starred review)

Lucinda Rosenfeld is the author of the novels The Pretty One, What She Saw..., Why She Went Home, and I'm So Happy For You. Her fiction and essays have appeared in the New York Times, The New Yorker, Slate, the Wall Street Journal, oprah.com, and other publications. She lives in Brooklyn, New York, with her husband and two daughters.
Loading...
or
Not Currently Available for Direct Purchase